John Ross [1782-1849], the son of Andrew Ross, a carpenter, was born in Golspie, Sutherland, and left at an early age for the West Indies. When he returned to Scotland he was known as 'John Ross of Berbice' and his obituary in the Inverness Courier noted that he had 'filled several situations with credit and ability' and had 'acquired considerable possessions there'.

He was an influential person in the colony and one of those who, in 1822, campaigned against promotion of 'free coloureds' as officers in the militia. Ross argued that the advancement of 'free coloureds' would deter further white migration to Berbice ['The Shadow and the Substance', Rawle Farley in Caribbean Quarterly, Vol. 4, No. 2 (December, 1955), pp. 132-153]. At a dinner in his honour held in Inverness in 1839 tribute was paid to 'his honourable conduct abroad, and of his patriotic behaviour in the colony of Berbice, in a case which involved a concerted plan for the massacre of all the whites of that colony'. It was also noted that through his position in Guiana 'he had been enabled to provide situations for many young men, natives of the Highlands'. [Inverness Courier, 13 March 1839]

He married Lillias Simpson in Inverness on 19th February 1825 [OPR] but was still active in Berbice until at least 1834. He was acting manager of the Caledonian Bank when it was established in Inverness in 1838, subsequently chairman of its board of directors and in his obituary was described as its 'principal promoter'.

He received almost £10,000 in compensation for the emancipation of his slaves, a sum which may have been invested in the foundation of the bank. He was also a shareholder in the Inverness & Elgin Railway Company and a member of its steering committee (Aberdeen Press and Journal, 26 March 1845).

Ross also enabled the establishment of the Inverness Savings Bank, by underwritng its debt for the first few years. He became a member of the town council and an elder of the Church of Scotland, which he represented at the General Assembly in Edinburgh for a number of years. As a local benefactor he organised contributions from Berbice towards improvements at the Ness Islands, linking them my footbridges to create public walks (Inverness Courier, 27 January 1830) and made donations to the Northern Infirmary (where he was a member of the Board of Management), Inverness Ladies Benevolent and Provident Society, Inverness District Visiting Society, Inverness Dispensary, Inverness Lunatic Asylum Fund, a fund for an ornamental fountain at Elgin, and other causes.

He saw his contribution to the Caledonian Bank in patriotic terms, enabling it to take 'its place among those monetary institutions that have so largely contributed to develop the resources of our beloved country — institutions that have raised it to its present pitch of prosperity—the admiration and wonder of the civilised nations of the world'. And when the bank presented him with a silver dish in the form of a thistle he was delighted that this was 'emblematic of tir nam beann, nan gleann, nan gaisgeach (land of mountains, of glens, and gallant fellows)'. [Inverness Courier, 18 November 1840]

One of his final public acts was to show the Duke of Sutherland the 'field gardens' (allotments) which has been set up in inverness by the Scottish Patriotic Society (Caledonian Mercury, 15 June 1848). 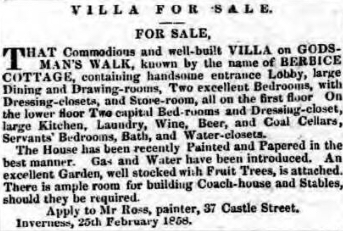 He built and lived in Berbice Cottage [later re-named Clifton Lodge] on Culduthel Road, Inverness, and also built three houses in his native Golspie, which he bequeathed to his sister Helen, the wife of Andrew Macleod, a successful merchant in Golspie. Two sons of Helen and Andrew later died in Guyana.

Ross and the Berbice plantations

From 1834 to 1841 Ross corresponded from New Amsterdam (Berbice) and then from Inverness with the Liverpool merchants Thomas and William Earle regarding the sale and management of plantations Utile & Paisible and Hanover. In 1837 he recommended the appointment of John Junor (possiblly from the Black Isle?) as manager, writing ‘John Junor is a first rate sugar planter & upright man, but being a little bit of a disciplinarian is no favorite with Blackie’ [Liverpool Maritime Museum, D/EARLE/5/6/1].

Utile & Paisible, on the west bank of the river Berbice, had been the property of the Irish plantation owner Lambert Blair and subsequently of his nephew, James Blair, and John McCammon. In 1817, when the first return of slaves was made, John Ross was their agent for this and four other plantations in their ownership, with a total of over 1200 slaves. One of Ross's children was named James Lambert, suggesting a close business relationship.

Ross was agent for a John McCammon as the sole owner of two more plantations and for one plantation belonging to the heirs of Alexander Bruce Morris.

At the time of his death Ross owned the coffee plantations Rossfield and Fearn, on the west bank of the Berbice.