Lancaster is a large cotton estate belonging to the representatives of a Mr. Phillips, who is lately dead. It is now under the direction of a manager, subject to the control of an attorney; the former residing on the spot, the latter at a plantation in the vicinity . . .

Two unhappy negroes, a man and a woman, having been driven by cruel treatment to abscond from the plantation Lancaster, were taken a few days since, and brought back to the estate, when the manager, whose inhuman severity had caused them to fly from his tyrannic government, dealt out to them his avenging despotism with more than savage brutality. Taking with him two of the strongest drivers, armed with the heaviest whips, he led out these trembling and wretched Africans, early in the morning, to a remote part of the estate, too distant for the officers to hear their cries ; and, there, tying down first the man, he stood by, and made the drivers flog him with many hundred lashes, until, on releasing him from the ground, it was discovered that he was nearly exhausted: and in this state the inhuman monster struck him on the head, with the butt end of a large whip, and felled him again to the earth ; when the poor negro, escaping at once from his slavery and his sufferings, expired at the murderer's feet. But not satiated with blood, this savage tyrant next tied down the naked woman, on the spot by the dead body of her husband, and with the whips, already deep in gore, compelled the drivers to inflict a punishment of several hundred lashes, which had nearly released her also from a life of toil and torture. 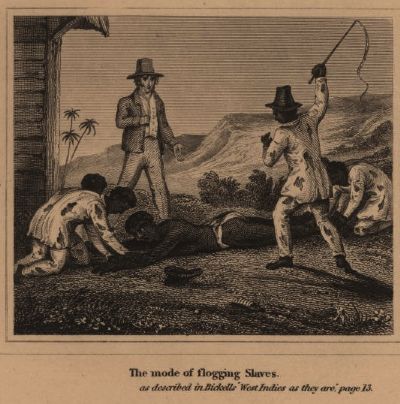 Hearing of these acts of cruelty, on my return from the hospital, and scarcely believing it possible that they could have been committed, I went immediately to the sick-house to satisfy myself by ocular testimony : when, alas ! I discovered that all I had heard was too fatally true; for, shocking to relate, I found the wretched and almost murdered woman lying stark-naked on her belly, upon the dirty boards, without any covering to the horrid wounds which had been cut by the whips, and with the still warm and bloody corpse of the man extended at her side, upon the neck of which was an iron collar, and a long heavy chain, which the now murdered negro had • been made to wear from the time of his return to the estate. The flesh of the woman was so torn, as to exhibit one extensive fore, from the loins almost down to her hams ; nor had humanity administered even a drop of oil to soften her wounds : the only relief she knew, was .that' of extending her feeble arm in order to beat off the tormenting flies, with a small green bough, which had been put into her hand for that purpose by the sympathizing kindness of a fellow slave. A more mocking and distressful spectacle can scarcely be conceived. The dead man, and the almost expiring woman had been brought home, from the place of punishment, and thrown into the negro hospital, amidst the crowd of sick, with cruel unconcern. Lying on the opposite side of the corpse was a fellow-sufferer, in a similar condition to the poor woman.. His buttocks, thighs, and part of his back, had been flogged into one large sore, which was still raw, although he had been punished a fortnight before.

. . . You will believe that I was careful to observe the progress of the frightful wounds inflicted upon the poor woman, and to watch her recovery ; and you will be shocked to know that her sufferings were severely increased, by the cruel neglect which succeeded to her punishment. One morning, upon hearing the loud cries of a female, I was led to look out at my window, when I law some negroes carrying this unfortunate woman from the sick-house into the yard, where they laid her down in the dirt, upon the bare ground, amidst a heavy shower of rain, then, kneeling at her sides, they proceeded to examine minutely into her wounds ; and you will scarcely hold it credible, when I tell you that they were employed a full half-hour picking maggots out of her sores. The ulcerations had penetrated to a great depth, particularly within side the thighs, where the lashes of the whips had cut round, and torn the flesh in a frightful manner. The ulcers were very raw and considerably enlarged, by the gnawing of the maggots which had been bred within them. I cannot describe to you the horror I felt at this deplorable sight.