For aught we now know to the contrary, Mr. James Glen, a native of Scotland, a resident of England, and subsequently of Demerara in South America, was the first to usher the New Jesusalem, as an external church, upon this western continent.

James Glen was a follower of the Swedish scientist and mystic, Emanuel Swedenborg [1688-1772]. Swedenborg published a number of scientific works but, in 1744, his life was transformed by a series of mystical experiences and dreams, after which he devoted himself to to interpreting the Bible and to relating what he had seen and heard in these visions. He published 30 volumes of his spiritual writings, all in Latin.

In April 1808 Thomas Staunton St Clair met and talked with 'Old Glen', then in his eighties according to St Clair (although others give his date of birth as about 1750), at Charles Edmonstone's wood-cutting establishment at Mibiri Creek. He made a sketch of Glen, which was included in his book A Residence in the West Indies (1834). Glen's final words to him were, 'Read Swedenborg - and be happy.' 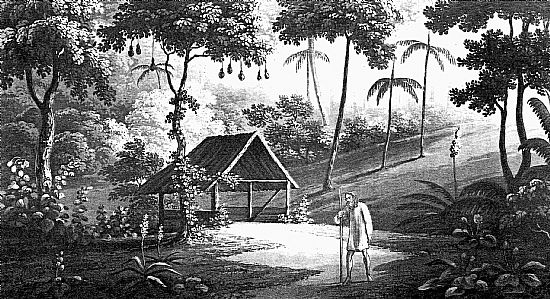 St Clair also drew on information from Charles Edmonstone to give an account of Glen's life. There are also accounts of Glen in histories of the New Church, founded by Swedenborg's followers, namely information published in The Newchurchman (1848); Robert Hindmarsh's Rise and Progress of the New Jerusalem Church, written before the author's death in 1835 but only published in 1861; Charles Higham's accopunt in the New Church Review, October 1912, p532-72 (referred to in Sketches of the New Church, 1920); and Peter J Lineham, 'The Origins of the New Jerusalem Church in the 1780s' in Bulletin of John Rylands Library, (1988) 70(3):109-122.

One inconsistency between the available accounts is that, according to St Clair, Glen had been in Demerara since the early 1760s, whereas the New Church sources suggest that he had settled there in the 1780s. Glen's own letter of 1812, to the Intellectual Repository, makes it clear that he had then been in the colony for 36 years, and so must have arrived about 1776. Highham says that he was born in Glasgow about 1750 and attended a 'three centuries old grammar school' from the age of twelve, to which he later wrote:

I am a merchant by profession; in politics, I am for peace, hating the very name of war; in religion, I have professed the tenets of Emanuel Swedenborg for twenty-one years, and will be glad to hear if there be any of that persuasion in Glasgow, and would most earnestly recommend the works of that great man to your particular attention and candid perusal.

He matriculated at Glasgow University in 1766 [Matriculation Albums no 2529] but there is no record of him graduating from there. He is described as the oldest son of James Glen in Glasgow. According to this source he went to South America in 1771.

According to St Clair, who drew on Edmonstone, Glen came to Demerara at the age of twenty as the mate of a merchant ship, and decided to stay. He was given a grant of land, bought slaves and within seven years had created a prosperous plantation.

All the sources agree that about 1783 he returned to London and, on the voyage, was introduced to Swedenborg's works by the captain of the ship. The captain had a copy of Swedenborg's De Coelo et ejus Mirabilibus et de Inferno (On Heaven and Its Wonders and on Hell) which Glen read on board, later declaring this 'to be the happiest day of his life, which thus brought to his view the glories of the heavenly state, and the stupendous realities of the eternal world'.

After Swedenborg's death in London in 1772, small groups of his followers had met to discuss his writings. Shortly after arriving in London in 1783, Glen saw a newspaper advertisement calling a public meeting of those interested in Swedenborg's thought. He attended this meeting, of eleven people, in the Inner Temple, Fleet Street, on 15th December 1783, and agreed to join with them in obtaining copies of all of Swedenborg's published works. They met again in January and formed 'The Theosophical Society' for translating, printing and distributing the writings of Swedenborg.

Shortly afterwards Glen left for Philadelphia where he gave a series of lectures on Swedenborg, with little impact. He left soon afterwards but a box of Swedenborg's works, which arrived afterwards, had an influence on others.

The group in London continued to meet and were joined, from time to time, by a number of 'exotic' visitors from the continent, including some involved with speculative Freemasonry. This added an 'apocalyptic fervour' to the Society and tensions soon emerged. Some differences were based on personalities but there were also questions as to what importance, if any, should be attached to writings other than those of Swedenborg. Some also sought to establish clearer forms of worship within the Society, which woud make it more like a dissenting church.

Following a poll of members in April 1787 the Society was re-formed as 'The Society for Promoting the Doctrines of the New Jerusalem', taking a high view of the importance of Swedenborg's writings. The regular meetings of the New Jerusalem Society were on Thursdays but a smaller group also met on Sunday evenings. On Sunday 29th July 1787 this group gathered to hear a lecture by James Glen, who had returned on a visit from Demerara.

Glen argued that 'the New Jerusalem' only encompassed those who were baptised into its truths, thus showing their 'earnest and hearty Rejection of the Doctrines of the Old Church'. Only those who took this step would experience, in the sacrament of Holy Communion, 'conjunction with the Lord and consocation with the Angels'. Glen proposed forms for Baptism and the Holy Supper which, with some additions, were accepted by this small group and later by most within the wider Society. He was, in this, a key figure in the creation of a distinct Swedenborgian church.

According to Hindmarsh, Glen had gone from Philadelphia to Demerara where 'he succeeded in forming a small but respectable Society of intelligent and sincere admirers of the Writings of Emanuel Swedenborg, which in all probability remains to the present day'. Glen 'at his own expense, made two voyages to Europe, in order to purchase as many of the writings as he could possibly obtain in England, Germany and Holland, which he dispersed through various parts of North and South America'. (New Jerusalem Magazine, London, April, 1790, No IV, p175). His visit in 1787 must have been one of these.

In a letter to the New Church in London (4 February 1789) Glen referred to the group established in Demerara:

I have seen Mr. Blatchy and Mr. Mosson. They both continue steady in the truths of the New Church. Sunday, August 3, 1788, Mr. Blatchy, Mr. Lincoln Rogers, Mr. Andrew Shanks, and I, met in Mr. Blatchy's house, where, after Messrs. Rogers and Shanks were baptized into the New Church, we four received the Holy Supper together, which was all done after the form made use of in London on July 31, 1787.

According to St Clair, Glen was now so much absorbed in the study of Swedenborg's doctrines that he neglected his plantation. Edmonstone, and others, tried to dissuade him but failed. When a large consignment of Swedenborg's books arrived on a ship from Holland, Glen was unable to pay and, after the matter came to court, his property was sold. He moved into the town of Stabroek, where he addressed meetings of enslaved Africans and the poorer white population, before moving to Berbice, where he was taken on as a private in the Dutch garrison. However, when he was found asleep at his post, he was punished and dismissed.

Returning to Stabroek, he was taken under the protection of Charles Edmonstone, who about 1793 brought him to Mibiri Creek. Glen built himself a hut in the forest about three miles from Edmonstone's. In 1797 he was visited by Dr George Pinckard, who found him still obsessed by Swedenborg:

Before I take you from the forest-embosomed abode of Mr Edmonstone, I should tell you that in a small garret of this sequestered home is living a very extraordinary character, in the person of an old Scotchman, an antiquated and eccentric being of the school of Loutherbourg; and who is, here, regarded as a literary phænomenon — a literal one he certainly is! he had formerly known better days; but having been reduced to poverty, he is become an exile from his country, and, in this profound seclusion, passes his declining days in the dull and harmless round of reading an old Hebrew bible, and two or three worn-eaten volumes of Greek and Latin. His person is plain — his figure meager, and his visage pallid. In manner, he is formal and pedantic. His wardrobe and furniture vie with the antiquity of his library, and both apparel and apartment well accord with his limited occupation. His wants being few and easily supplied, he lives contented and happy. We found him teaching Mr. Edmonstone’s children to read; and this we understood to be a duty of relaxation — a kind of remission from his converse with the musty old volunes, in the perusal and re-perusal of which he finds the solace of his cares, and the gratification of all his remaining ambition.

Members of the New Church were generally opposed to slavery but in 1812 Glen wrote to the Intellectual Repository of his opposition to this view, arguing that slavery was permitted. He based his argument on his knowledge of enslaved Africans who were Fula and Mandingo, were literate in Arabic and could read the Koran. He was horrified by their attachment to polygamy and thought this must be even more so in 'the other negro nations'. He thought that this 'love of polygamy' was 'in the inmost delight of all negroes' and meant that it was 'against the laws of Divine order that they should become Christians'.

On 15 March 1813 he was visited by John Wray, of the London Missionary Society, who recorded the following in his diary:

We sat down in the shade, under a large silk-cotton tree, and conversed some time on religious subjects. Saying he was much pleased with the missionary and Bible Reports I had sent him, he told me to read the Bible by Swedenborg's works. After some conversation, he said, 'Do you read Greek? ' ' A little, sir,' I replied, ' but only the New Testament.'

I was now qualified to enter his hut. He made me a present of a very beautiful Psalter, to read Hebrew with him. Possessing Parkhurst's Greek Lexicon, he requested me to lend him the one in Hebrew, which he had not seen, and also Campbell's translation of the New Testament. This eccentric character understood Latin, Greek, Hebrew, English, French, Dutch, and German, and was familiar with divinity, law, physic, and other subjects. He had an extensive acquaintance with the Indians.

'Glen also knew Arabic, bequeathing his Bible in that language to a New-Church Society in England, where
it is still preserved.' (Review, p. 568).