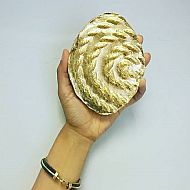 In 2019 Ashanti cast a set bronze plaques commemorating free women of colour in Guyana who were associated with Scotland. 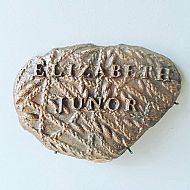 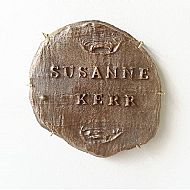 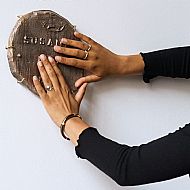 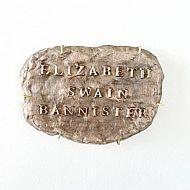 Ashanti Harris’ ‘History Haunts the Body’ (2020) is a continuation of the artist’s research into the historical relationship between Guyana, where the artist was born, and Scotland, the artist’s home, taking in the ignored and forgotten legacies of a historical, female diaspora.

‘History Haunts the Body’ tells the stories of four Guyanese women who, along with their children, were part of Scottish society in the 18th and 19th centuries. Their complex histories are recounted by a single female voice, accompanied by outdoor rural and coastal soundscapes recorded in various locations where the women were known to have lived or visited. A soundscape recorded at Cromarty Harbour in the Black Isle provides a transportive undercurrent to the audio narration from beginning to end. A low mechanical hum – the sound of a ship approaching and passing by the harbour – grows in intensity throughout the duration of the work and acts as a kind of chronos, folding together the present with the past.

With thanks to Adebusola Ramsay, David Alston and Jen Martin.

Ashanti Harris' ‘Virgo’ was a live monologue and sound performance drawing on Harris’ research into the life of Elizabeth ‘Eliza’ Junor (1804–61), one of the four Guyanese women whose history in colonial Guyana and Scotland is recounted through the audio work 'History Haunts the Body'.

The performance was an interior address and an astrological reading of Eliza Junor through her birth sign of Virgo, as a method of gaining perspective and understanding of this woman and the course of her life that took her from Essequibo in British Guyana to the Black Isle in Scotland.

Using the influential astrology book ‘Knot of Time: Astrology and Female Experience’ by Lindsay River and Sally Gillespie as a guide, the performance interpreted Junor through characteristics derived from the horoscope in order to speculate and elaborate on the sparse information recorded about Junor as a Caribbean-Scottish woman.