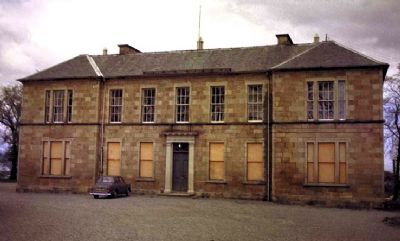 Tain Academy was founded in 1813, under the influence of Hugh Rose of Glastullich and received donations of £1000 from Berbice in 1814 [RW & J Munro, Tain through the Centuries (Tain 1966)].

Marion (Minny) Iver, the daughter of Archbald Iver, a merchant in Demerara, attended Tain Academy from 1816 (Admissions Register). The first record of her father in Demerara is in 1804, when he gave notice that he was intending to leave the colony. If he did, he returned and in 1812 again gave notice of his intention to leave, having would up the firm of Archibald Iver & Co. in Georgetown, which imported and sold a wide variety of supplies. He was still in Georgetown in 1813 but by 1816 he had returned to Edinburgh where he married [OPR 685/01 0540 0205] Mitchel Shaw, ‘daughter of the late James Shaw merchant Inverness’ [OPR Mitchel baptised 11 Dec 1786]. His will [Prob 11/2028] makes it clear that Marion, to whom he left £500, was his ‘natural’ [illegitimate] daughter, born before his marriage, and census returns show that she was born in Demerara. It is very likely that her mother was a free woman of colour.

Archibald Iver and Mitchell Shaw returned to Demerara after their marriage. They had threee children, Archibald, Mitchell and Jane. Jane was born in Demerara in 1821 and it is possible that the two other children were also born there. It was not until 1826 that he wound up his partnership in Georgetown with John Gilchrist.

In 1838 Marion, then living in Edinburgh with her father and step-mother, married George Patullo, a draper from Perth.

From 1820 to 1823, Eve, George and Gerard Oudkerk were pupils at Tain Academy. They were the children of Edward John Oudkerk Esq of Plantation Goed Fortuin, Demerara [Admissions Register]. They were still in Demerara in 1817 and because they had been freed but not formally manumitted they appeared in the Slave Register - George, a mulatto, aged 11 and Eva, a mulatto, aged 9.

Oudkerk owned other slaves in partnership with George Rainy, which would explain why he send his children to Tain.

In 1830 George Oudkerk married an Eleanor Barnes in Demerara. George became the 'colonial book-keeper' of Demerara in 1861 [Gentleman's Magazine].