John Gordon (1782–1850) was the eldest son of Adam Gordon, tacksman of Grimachary in the Strath of Kildonan (Sutherland), who held his tack as a subtenant of Joseph Gordon of Carrol and then had a life-rent in his own name from the Sutherland estates. Adam Gordon was, according to Rev Donald Sage, a 'shrewd wordly-wise man' who, with his wife 'lived in the exercise of the most unbounded hospitality, and at the same time economised so as to realise a good deal of money' [Memorabilia Domestica]. 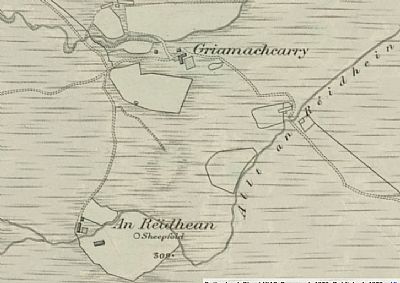 John Gordon entered the army as an ensign in 1804 and served in the Peninsular War, rising to the rank of captain in 1810. For some time he was attached to the staff of the Duke of Kent and used his influence to obtain commissions for his three younger brothers. He served in the Caribbean from 1816 until 1821. He was in Demerara in September 1817 when he registered his ownership of one slave, a 21-year old ‘mulatto’ woman named Susan or Susannah, born in Barbados. In the same month his second wife, Catherine Smith (from Inverness), died in Trinidad and soon afterwards Gordon became involved with Dorothea Christina Thomas, the daughter of Dorothy ‘Doll’ Thomas.

Gordon persuaded Dorothea to live with him on the strength of a promise of a church wedding when he left his regiment. In the meanwhile the couple had a private ceremony in 1819 in which they exchanged vows and John put a ring on Dorothea’s finger.

. . . she took the name Mrs Gordon and was seen on his arm on social occasions, while he openly wore the gold watch and chain she had given him. Of an evening he “rode out with her” . . . she managed his household , stocking it with fine pieces of furniture and silver that belonged to her, as well as supplementing his meagre salary with an allowance from her mother. [Kit Candlin & Cassandra Pybus, Enterprising Women (2015), 131-7 for this quote and other details]

The couple came to Britain in 1821 and their son Huntly George Gordon was born in Glasgow in August. When John, now a major, finally resigned his commission in 1823 he sought what he considered a suitable dowry from Doll Thomas before entering into a formal marriage with Dorothea – and when she refused to offer more than £5,000 (set against Dorothea’s future inheritance) Gordon prevaricated. The couple continued to live together in Edinburgh and entertained friends at home, including Major Gordon’s three brothers who treated her as a near relation. However, by 1826 Gordon had met a widow with an annual income of £3000 and had proposed marriage. Dorothea – and her mother – believed she was already married to Major Gordon under Dutch law which pertained in Demerara; and Dorothea went to court to seek a ‘declarator of marriage’ under Scots law, which allowed for marriage by ‘cohabitation with habit and repute’. It was an action which Dorothea lost, largely because those who gave evidence on her behalf – as to the couple being commonly known as man and wife – were servants, shopkeepers and landladies rather than those who moved in John Gordon’s social circle, who regarded him as a single man. The case helped to define the requirements of establishing marriage by cohabitation by habit and repute, which remained a form of marriage in Scots law until 2006.