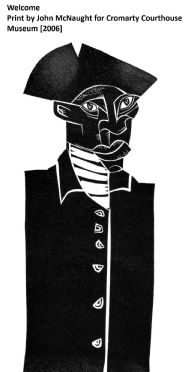 Lachlan Cuming [c1756-1836] was the son of Patrick (aka Peter) Cuming of Ardcannie (Moray). He was a cousin of Thomas Cuming, their fathers being half-brothers. Lachlan married in Demerara in 1794, to Margaretha Clara Heyliger [1769-1829], daughter, by her first husband, of Catharina Gertrude Lossner (who had later married, as her second husband, Thomas Cuming]. Margaretha died in Brussels on 5 November 1829 [Blackwoods Magazine].

In 1798 Lachlan bought, for £7353, the estate of Blackhills near Elgin, part of the larger Innes estate, which was acquired by Thomas Cuming at about the same date. [History of the Province of Moray, p352]

He returned from Demerara in the mid-1820s to live at Blackhills, until his death in 1836. With him was the slave Welcome, who became his house servant.

By 1798 Cuming owned Craigmill, a 250-acre coastal cotton plantation named after Craigmill in the parish of Dallas, in Scotland. He was one of the four 'Burger captains' of the colony [G Pinckard, 1806, III p403].

By his marriage he came to own plantation Chateau Margo (or Margot), which was the property of his wife, as the widow of her first husband, John Lucius Charles van Baerle.

In 1815 he chaired a meeting to establish the first Scots kirk in Demerara; and a meeting to set up an agricultural society [Timehri Vol 6 p74].

Cuming was in Demerara before and during the slave revolt of 1823 and is mentioned a number of times in the diary of the missionary John Smith, who was sentenced to death on the grounds that he had encouraged rebellion.

1 June 1823
Missing Immanuel from chapel, I inquired of Bristol the reason of his absence, it being a matter of surprise. B. told me he was in the stocks. The reason of his confinement is to be sought in the hatred his manager bears to him. Immanuel is, I believe, a true christian, and is the leading man on the estate (Chateau Margo) among the christians. He has a weekly meeting in his house for prayer, reading the scriptures and teaching the catechism. This is an eye sore to the manager, and renders Immanuel an object of ill-will. But what seems to have vexed this man (Manson) most is Immanuel bringing several of the slaves to chapel to be married, which has in a great measure defeated his wishes respecting some of the young women. The ostensible reason of putting Immanuel in confinement, is, his beating a boy, as Manson says, because he did not or would not bring money to me and this the proprietor, Mr Cuming, affects to believe!

On Tuesday after the rebellion the militia arrived at Chateau Margo and found Lachlan Cumming in an ‘awful temper’, with a broken nose sustained in a struggle with slaves who had tried to take his musket from him. The slaves had put Cumming, the manager and the overseers in the stocks. The negro women had been severely treated by the manager and they now delighted in slapping him on the face. An old slave ‘who had been in the habit of very frequently going on the sick list, instead of going to work, for which the manager invariably treated him with a copious dose of salts every morning, thought this no bad opportunity to pay him off in his own coin, so accordingly mixed up the dose which (had all gone on as usual) would have been this morning’s portion, he presented it to the manager . . . ‘Here Massa, here something for do you good.’ The manager tried to resist but the slave insisted. ‘Drink um Massa, drink um arl up, pose be good for me, be bery good for Massa Buckra, so drink um up rectly, I say’. After that most of the blacks had gone, leaving the manager and overseers in the stocks.’

Lachlans Cuming's will suggests that he had children by a free coloured woman in Demerara. He left money to an Ann Brown, born in Demerara but resident in Elgin, whose mother was a Margo Cuming. Margo had a brother, William Cuming, who had two children, Lucius and Betsy. The mother of Margo and William was a coloured woman only refered to as Violet. The most likely explanation is that Margo and William were Lachlan Cuming's children.

He also had an illegitimate son, Thomas, who was baptised in Scotland in 1801. This is probably the same Thomas Cuming of Demerara who graduated from Edinburgh University as a doctor in 1824 and died in Edinburgh in 1830.