Alexander and John Munro were sons of Alexander Munro (1754-1825), a customs officer in Cromarty. Both went to Demerara. Alexander died there, while John [born 1799] returned to Scotland only to die in 1835 shortly after his return. John was  commemorated on his gravestone as ‘John Munro Esq late of Demerara’. 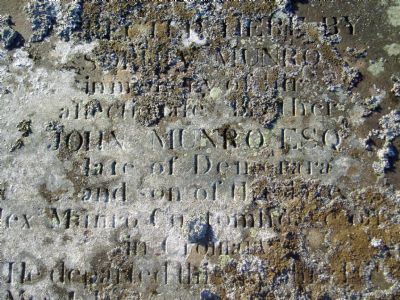 In his will [SC25/44/3], written in Demerara in 1833, John divided his estate between his mother, his sister Sophia (Mrs Walter Mustard), and the five daughters of his late brother, Alexander, in Demerara. They are named as Eliza, Jane, Sophy, Mary and Jessey Munro. His estate was valued at £410 but this excluded a bond in his favour for 13,890 guiders (about £1000), a debt which had not been recovered.

On 9 January 1823 an advertisment appeared in the Demerary & Essequebo Royal Gazette, placed by the executors of Alexander Munro, offering for sale 'the woman Eve and her five mulatto children' together with a plot of land on the river, with a 'comfortable dwelling house'. [Folarin Shylion, 'Slave Advertisements in the British West Indies' in Caribbean Studies , Vol. 18, No. 3/4 (Oct., 1978 - Jan., 1979), pp. 175-199]

The children would appear to have been emancipated by the time John wrote his will in 1833. 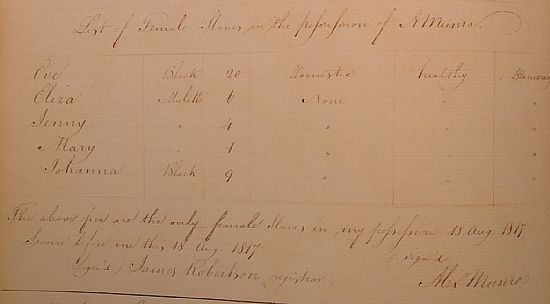