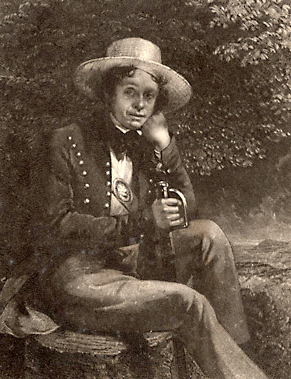 Alexander Alexander (b. 1781/2), soldier and writer, was born in Dundonald, Ayrshire, the illegitimate son of a wealthy Scottish merchant. Almost everything known about him comes from his remarkable autobiography, published in Edinburgh in 1830, The Life of Alexander Alexander (2 vols, available free on Google books). There is a summary of his life in the Oxford Dictionary of National Biography.

After an unhappy childhood, he was sent at the age of eighteen to work as an overseer on slave plantations in Curaçao where, on his first morning in 1800, he was shocked when he witnessed a slave being flogged. However his later experiences of empire stripped him of this compassion and idealism. After returning home he enlisted in 1801 in Royal Regiment of Artillery and served in Ceylon until 1810, when he returned to London suffering from ‘the real bitterness of a spirit dissatisfied with itself, with the world, and all around it’ (Life, 1.141). He then served in Dublin until his discharge in 1814.

From 1815 he worked as a slave overseer on plantations in Demerara. His account is especially valuable because he was an older, poor white man, drifting from one job to another and walking the length of the coast of Demerara and Berbice. Alexander arrived in Georgetown from Greenock on 31 December 1814. The captain of the ship found him a position as overseer at Potters Employ on the Mahaica, under the management of a Welshman named Hughes who took a dislike to him. After only two days he was dimissed to be replaced by a young man sent out by the owner of the estate. In seeking other work he was often mocked and ridiculed, often by fellow Scots, including a Mr Fraser, manager of a coffee estate. On one occasion he was, our of pity, given accomodation by a slave watchman who made sure he moved on at dawn as the owner was a 'tingy Kotchman' [stingy Scotchman]. He described Georgetown as 'filled with a race of people, everyone on the catch, and I a stranger . . . I met with nothing but insult and ill usage'.

Through acquaintance with a former soldier, Mr Thompson, he was taken by schooner with a Mr Cameron, a carpenter on plantation Richmond, to Essequibo to seek work, which he found on plantation Hope under a Mr Ousley. He had to walk the six miles to the plantation during which time 'I met several white men on horseback, who passed me by as if I had been a negro, for in this colony a foot passenger is an object of contempt'. Hope was a new estate moving to sugar from cotton. Ousley was regarded as 'the best planter in the colony' because he made everyone fear him - he was 'quick in his movements, loud in his talk, and very abusive . . . almost incessantly cursing, shouting and flogging . . . the two drivers were made to flog each other, and then flog the people, even the domestics.' he would also 'humour' his slaves, granting them extra holidays

Alexander was, however, again replaced on Hope in January 1815 by a young man send out from Britain. He moved as overseer to one of the Governor's estates, Huis te Dirien in Essequibo, where the manager, Mr Potts, took a dislike to him and he left after five months. He was ill for some time in Georgetown and then moved in August to Richmond Hill on Leguan island, owned by a Mrs Nugent, who was in America. he found it difficult to control the slaves on this plantation and left in November when his old enemy Potts became manager. In December he was employed on Free & Easy under a harsh manager, Mr Stewart, but he soon fell ill and was told to leave.

He then worked on Beehive belinging to Mr M van Barley. This was the plantation's first year in sugar and, when the sugar produced was of poor quality, floggings increased. Alexander flogged more often than he had ever done before but was still criticised for leniency. He again fell ill and after he left a number of slaves ran away to the bush. On 7th May 1818 seven of them were executed in Georgetown. Alexander described there demeanour at their trial:

These desperadoes, on the day of their trial, said boldy and fearlessly, "Massa, no make tory too long, do beesiness one time." They came to the scaffold cheerfully, calling out as they looked around them, "Good bye, massa - good bye, nigga - massa, ever body;" and some of them said, "I soon go back to my own country;" calling on those they knew by name as if they had been on the eve of embarking for a voyage by sea.

The manager of Beehive was, however, deprived of his position and the owner banned from managing the estate himself.

Alexander then walked the 100 miles from Georgetown through Berbice to New Amsterdam, and a further forty miles to the last sugar estate. Most of the estates had been abandoned because of a shortage of water but he was better received than in Demerara. He considered travelling onwards but instead returned to Georgetown, and obtained a position on La Reduite under a Mr Maclagan. The slaves on this estate, who could sell their produce in Georgetown, mocked Alexander for his poverty. After five weeks his fever returned and after recovering he spend five weeks on Hope in Essequibo. He had received £20 from his father in Scotland, which enabled him to pay off his debts and then took a long trip up the Demerary on a boat taking timber for wood plantations.

In 1817 he enlisted in Simón Bolívar's army alongside many other British volunteers but was disappointed at his underemployment. After leaving the army in 1820 he returned to work as a slave overseer, this time near Santa Marta, on the Caribbean coast of New Granada. After Santa Marta Alexander drifted unhappily as soldier, privateer, and merchant's assistant, unsuccessfully requesting a pension from the (now independent) Venezuelan authorities in late 1821. He then returned to Glasgow in 1822. Commenting on ‘how strange had been [his] fate’, Alexander felt he had completed a cycle of twenty-two years of ‘misery and frustrated hopes’ (ibid., 2.309). Alexander drifted around central Scotland until he was imprisoned for breaking the terms of an order forbidding him from seeing his father, spending a total of seven months in Irvine and then Ayr gaols. Here he wrote his life story, a tale of constant disappointment, disillusion, and despair.