Dr George Pinckard made an expedition up the Demerara river with Mackenzie in 1797 and also visited Lusignan [Pinckard, III, p380], a 500-acre coastal cotton plantation which was one of the few plantations with an ornamental garden. In March 1801 Mackenzie announced his intention to leave Demerara 'by the next fleet' [National Archives of Guyana]. 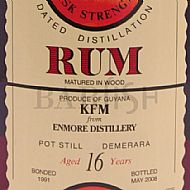