George Mackenzie, from the parish of Fodderty (Ross-shire), was a partner of Donald Mackay in the purchase of plantation Reliance (Essequibo) in 1811, the two have previously run a 'task gang' of slaves together. In 1820 there were 516 enslaved people on Reliance. Mackenzie died in Essequibo about 1827, having made his will in October of that year [Lincolnshire Archives HD/65/29].

He lived with a free coloured woman, Adriana, with whom he had a daughter Charlotte (1816-1892). In his will he left Adriana a legacy of 12,000 guilders (about £1000) and annual provision of two barrels of sugar and 'a reasonable quantity of plantains'. His daughter Charlotte was left an annuity of £300 until she came of age, when she was to receive £6000. 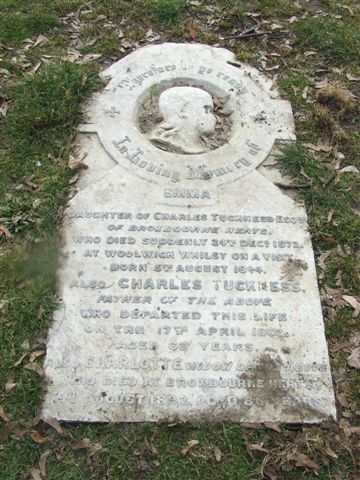 In 1847, aged 21, Charlotte married, Charles Tuckness of Demerara, who already had a daughter Emma, born in Demerara. They were married in London and all three are buried in the churchyard of St Nicholas, Plumstead, Greenwich.

George had a brother, Thomas, in Strathgarve (Ross-shire), who had children, including two sons, William and John. George Mackenzie left the residue of his estate to these relations, with his brother Thomas to receive the interest during his lifetime and the capital then to be divided among the children. George Mackenzie's former partner, Donald Mackay, who was one of his executors, was critical of the nephew, John, who obtained a deed of assignment at Dornoch sheriff court of his father’s interest, in consideration of granting a bond of £500 a year to his father during his natural life. Mackay calculates this should have been worth about £2000 a year for six years, and after that £1600 to £1700 a year. [NAS GD23/6/391/12]