Alexander became manager at Lord Seaforth's plantation Brahan in the autumn of 1804, working under Peter Fairbairn, but by the following September he had died of 'putrid fever'. [NAS GD46]. Putrid fever was the common name for typhus.

Fairbairn wrote that he was the 'fourth child of his mother lost after reaching maturity, only the minister of Kirkhill remains'. This was Alexander's brother, Donald, who had become minister of Kirkill, succeeding his father who died in 1802. The same family were succesive ministers of the parish for 100 years and were highly respected. 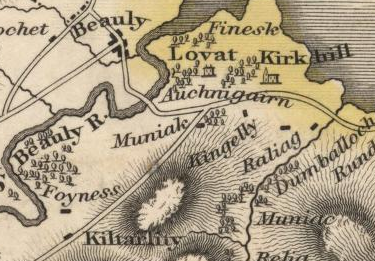 As Gaelic was an essential requirement in this parish, it is almost certain that Alexander was also a Gaelic speaker.