Alexander Cameron was the son of Elizabeth MacBean [1738-1831] and Alexander Macgillonie Cameron [1736-1831], 5th of Invermallie in Lochaber (the last of the line to possess the property). He was 'for some years in the Virgin Islands before moving on to Surinam' where by 1804 he was, in his own words, 'on a pretty extensive scale and as far as I have gone my prospects are favourable'. [Lorraine Maclean, Indomitable Colonel, 256]

His sister Jean/Jane [1783-1868] (in an action for seduction against a John Gillies in 1808, NRS CC/8/5/29/3) said that their father was ‘of an ancient and respectable family’ and that that her brothers ‘were sent forth into the world with such portions as enabled them by their own industry to acquire considerable fortunes. One had purchased an estate in Surinam, another was a lieutenant in a sloop of war who had gained £3,000 prize money, the rest had done well in the West Indies. And her sister was ‘married to one of the most respectable Merchants in Inverness.’ [Leah Leneman, ‘“No Unsuitable Match” Defining Rank in eighteenth and early nineteenth century Scotland’, Journal of Social History (March, 2000)] Their father died in reduced circumstances in 1831 [Celtic Monthly vol 8 1900 p112].

In 1819 'Alexander Cameron esq of Surinam' was a member of the Highland Society of Scotland and in 1820 he was one of the vice-presidents of the Fort William subscription library. Both Cameron and Sir Walter Scott donated volumes to the library in that year [Caledonian Mercury - Monday 06 November 1820]. 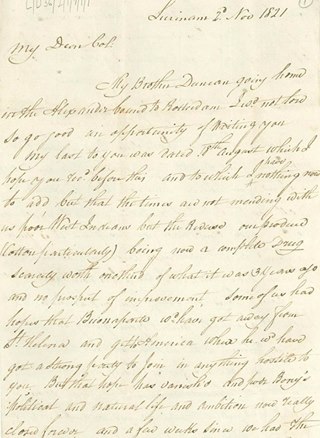 The Highland Council Archive (Lochaber) holds a letter from Alexander Cameron, written from Surinam on 2 November 1821:

My Brother Duncan going home in the Alexander bound to Rotterdam I did not have so good an opportunity of writing you. My last to you was dated 18th August which I hope you received before this, before this and to which I have nothing new to add, but that the times are not mending with us poor West Indians, but the Reverse, our produce (Cotton particularly) being now a complete Drug scarcely worth one third of what it was 3 years ago and no prospect of improvement. Some of us had hopes that Buonaparte would have got away from St Helena and get to America, where he would have got a strong party to join in anything hostile to you. But that has now vanished and poor Bony’s political and natural life and ambition now closed forever.

In October 1827 'a son of Invermallie' passed through London on his way north [Loraine Maclean, Indomitable Colonel, 295].

When Alexander Cameron died in Surinam on 7 December 1821 he left plantations Clyde, Leasowes and Oxford to his brother Duncan Cameron, to William Mackintosh, the son of his sister Ann Cameron, and to Donald Cameron. It is likely that Donald was another brother. In 1822 Donald Cameron was appointed attorney in Surinam for John Piggott Wilson, one of the partners in Campbell, Dent & Co [Power of attorney of John Piggott Wilson dated 06/04/1822, Nationaal Archief Den Haag, 'Suriname: Oud Notarieel Archief » Inventaris nr. 933, Scan: 29-33].

In 1843 this William Mackintosh 'of the colony of Surinam' erected two gravestones in the kirkyard of Kilmallie (Lochaber), one in memory of his grandparents Alexander Cameron of Invermallie and his wife, Elizabeth MacBean, the other in memory of his father, Alexander Mackintosh [1769-1802].

After the death of this Alexander Mackintosh, Ann Cameron seems to have married James Munro of Surinam [Inverness Courier, Thursday 26 October 1854], and it is likely that their son was the Duncan Cameron Munro [1820-70] who was appointed Birtish Consul in Suriname in 1857.

Alexander has a son named Alexander who was killed in Nickerie in 1818 [plantation Leasowes, p11 footnote 1].