Rose served as a Justice of the Peace in Aberdeen, when he was in Britain between 1820 and 1825, and again in 1833; and he acted in London as a spokesman for Demerara planters. 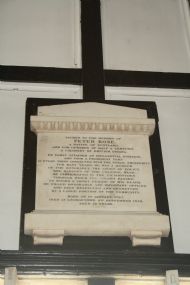 His memorial in Georgetown reads:

Sacred to the memory of Peter Rose a native of Scotland and for upwards of half a century a colonist of British Guiana. He early attained an influential position and took a prominent part in everything connected with the public posterity. For many years he was a member of the Court of Policy and the manager of the Colonial Bank. Born 1st January 1787, Died 9th September 1859, aged 72 years.