Back to home page 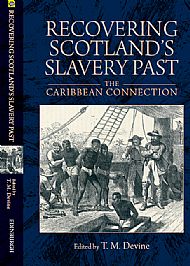 'One of the most important books to be published in Scotland this century.' Kevin McKenna, Observer (22 Nov 2015)

'Recovering Scotland's Slavery Past is an illuminating marvel. But the very fact that it illuminates is a measure of the darkness that prevailed until recently.' Ian Bell, Herald, 10 Oct 2015.

'The paramount truth to emerge from the essays in Recovering Scotland’s Slavery Past is that this little country was a big player in a hellish business.' Rosemary Goring, review article in the Herald (10 Oct 2015)

My essay in this book: ‘The habits of these creatures in clinging one to the other': Enslaved Africans, Scots and the plantations of Guyana'.

'This pioneering volume also has a resonance far beyond slavery, underlining the impact of slavery on Scotland itself. Here is a book which ultimately demands a broader reappraisal of modern Scottish history.' James Walvin, author of Crossings: Africa, the Americas and the Atlantic Slave Trade.

David Alston, ‘You have only seen the fortunate few and drawn your conclusion accordingly’: Behavioural economics and the paradox of Scottish emigration

in Angela McCarthy & John Mackenzie (eds), Global Migrations: The Scottish Diaspora since 1600 (EUP, 2016): A tribute to Professor Sir Tom Devine, FBA, the leading historian of modern Scotland and its diaspora.