A John McLagan, who witnessed a will drawn up by William McBean in Demerara [HCA D104 McBean of Tomatin papers], may have been his father (b.1758).

In Edinburgh in 1827 he married Elizabeth Hagart Stewart [1794−1833]. No children were born of this marriage but he already had two children from a relationship in Demerara: John, his oldest son, who became a surgeon and died in Demerara in 1850; and Peter [1823−1900]. 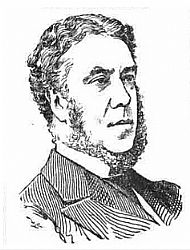 John graduted from Edinburgh University in 1836 and in 1841 was resident with the manager at Vive la Force plantation, Demerara, from where he reported favourably on the health of 'coolie' labourers [House of Commons Papers, Volume 16].

The younger Peter McLagan was educated at Tillycoutry school and Edinburgh University (Dod's Parliamentary Companion), inherited Pumpherstone, and was the Member of Parliament for Linlithgowshire from 1865 until 1893. He invested in the production of shale oil but was declared bankrupt in 1893.