When Thomas Cuming died in Elgin [Scotland] in 1813 he was regarded as a rich, successful man and was commemorated at the parish church of St Michael’s, Dallas, by this large tombstone. In the Demerara newspaper he was described as 'the patriarch and benefactor of Demerary' [E&DRG 15 June 1813].

He arrived in Demerara around 1760 and rose to be one of the members of the Council of the colony, which formally surrendered the Dutch colony to British forces in 1796.

By 1798 he owned the sugar plantations Egypt and Garden of Eden – 1000 acres in total, with over 300 slaves – on the west bank of the Demerara; Ketty or Kitty on the east sea coast of Demerara; and, most importantly, the coffee plantation La Bourgade, on the outskirts of the capital Stabroek. Bourgade was laid out in streets in the late 1790s to create Cumingsburg – an expansion of the town of Stabroek. He was also in partnership with a Bernard Albinus in a brickworks at Steenbakkerie adjacent to Garden of Eden.

When he finally left Demerara in 1810 he was one of the leading figures in the colony. Formal addresses from planters in Berbice and Demerara, published in the colonies' newspapers in 1812, show the extend of his connections.

His letters [see Warrand of Bught papers in Library] – and those of other colonists – show him finding positions in Demerara for friends and relations from the north of Scotland. 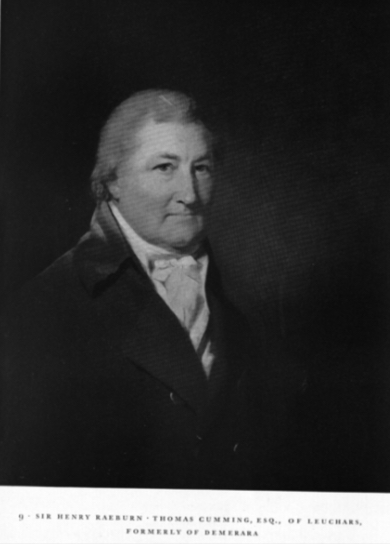 He was in Demerara by c1760. About 1768 he married a Dutch widow, six years his senior, Catharina Lossner, whose father had been governor of Berbice. Thomas wrote to his first cousin, William Rose, in July of that year saying:

I have reason to be thankful for my choice of a wife with whom I enjoy a large share of conjugal Felicity. [Domestic Papers of the Rose Family, Aberdeen, 1926]

In the same letter he indicated his intention, which was not realised, to sell his estates in Demerary and return to Scotland, by way of Holland. He also thanked William Rose for the help he had given to Thomas's mother and his sisters in Scotland.

And then, in 1798, Thomas himself remarried, in Scotland, to a much younger woman – the thirty-three year old Isabella Fraser, daughter of James Fraser of Belladrum and sister of three of the leading planters in Guyana. Again there was one child, a daughter Hannah.

In 1798 Thomas attended a meeting in Inverness to found the Northern Infirmary [ Sun (London, England), Tuesday, October 16, 1798; Issue 1892] and in the same year he bought Innes House Elgin, from where he wrote a number of letters as his financial affairs worsened [NAS GD23]. These include financial assessments of plantations Ketty and Garden of Eden which he was considering selling. When his wife died, on 1st January 1800 [Caledonian Mercury (Edinburgh, Scotland), Thursday, January 9, 1800; Issue 12217], after the birth of their daughter, Thomas sold Innes House and returned to Demerara.

Thomas Cuming’s legitimate children were Catherine (Kitty) [b1782] and Hannah [b1799] but, after his death, properties in Demerara were transferred to a Kitty and Thomas, the ‘coloured children of the free woman Hellen Butler’ and to an Isabella, the daughter of ‘the free mustie woman Sarah Eddy’. [Demerary and Essequebo Royal Gazette, 21 Jan 1815.] In his Scottish will he left money to support Thomas Cuming, son of Ann Green, while he was a school and £200 when he entered into 'a line to make his livelihood' [GD23/10/689]. Ann Green died in Demerara in or before 1807 [E&DG 10 July 1807].