Return to Macraes of Inverinate

Colin Macrae was born in 1776 in Kintail (Ross-shire) and came to Demerara in 1796. In 1828 he gave evidence to Parliament on the slave trade in which he stated that he had been in the colony for thirty-two years [Slave trade]:

It is now two-and-thirty years since I first went over to the colony. I have been frequently absent from it since, but never two years at a time upon the whole. I dare say I have been five-and-twenty years permanently resident there.

When did you last leave it ?—I left it last June twelvemonth, June 1826. 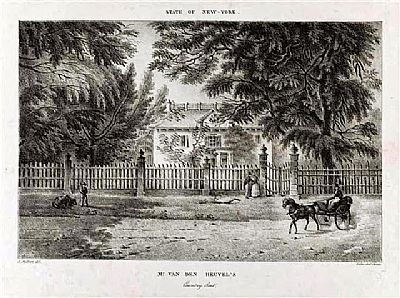 In mid-1804 he left the colony for Europe [Essequebo and Demerary Gazette 1804 May 26 & August 04] and in October 1805, in New York, he married Catherine Gertrude Vandenheuvel, a daughter of a former Dutch Governor of Demerara. The Vandenheuvels had left Demerara for New York in the early 1790s, initially to escape the epidemic of yellow fever but had decided to stay in the city where they bought an elegant mansion house in the Bloomingdale area of Manhattan [see The Lost Van den Heuvel Mansion -- Broadway at 78th Street]. A number of Colin and Charlotte's children were born in the United States, possibly at the Vandenheuvel house (right). The Slave Returns for 1817 [TNA T71/392 No 1138] show that an enslaved servant John, age 30, and an enslaved nurse Amelia, age 38, were with the Macrae family in America.

By 1833 Macrae was living at The Grove, on the outskirts of Nairn, a property originally (and now) known as Achareidh House. His daughter Justine Henrietta was married in Nairn in 1833 and, in 1835, two of his American-born grandchildren were baptised there [OPR Nairn]. They were the daughters of his daughter Charlotte, who had died in Florida in 1834.

The above mentioned Justine Henrietta [1816-1894], was born in Georgetown in 1816. She married Horatio Ross of Rossie [1801-86], whose father had made his fortune in eighteenth-century Jamaica.

Colon Macrae returned died in Edinburgh in 1854. There is a piobaireachd ‘Colin Macrae of Inverinate’s Lament’ associated with him.

Colin's son Farquhar worked in Jamaica, probably as an overseer or attorney, and moved to Florida in 1834 where he promoted the use of standarised accounting practices on plantations through the magazine the Farmers Register.