Return to Robertsons of Kiltearn

Gilbert formed a relationship in Demerara with Eliza Thomas, one of the daughters of the remarkable 'free coloured' woman, Doll Thomas, and a son Henry [1807–81], also known as Harry, was born in 1807. Gilbert had lost an infant child, Ann, in August 1806 and Eliza may also have been her mother [NLS GB233/MS19332/f67, Robertson to Traill, 17 August 1806]. Along with a number of Doll Thomas’s other grandchildren, Henry was sent to school in Scotland, possibly to Dollar Academy. In a letter written to his wife in 1810 [Liverpool Record Office, Parker Family Papers, 920 PAR, 1/53, 11 August 1810], Charles Parker caustically remarked, ‘Who do you think is in Glasgow but Gilbert Robertson’s Mother in Law Doll Thomas with about 19 other children & grandchildren come home for education?’

In 1817, five slaves were registered in Henry's name [TNA T71/393 No 1285]. The return was made by his aunt, Charlotte Fullarton, acting as representative of Dorothy Thomas, his guardian - indicating that Eliza had died.

Doll Thomas’s will [PROB 11/2007/434, will of Dorothy Thomas born Kirwan, 26 February 1842], written in 1846, included the following legacy: I give and bequeath to my grandson Henry Robertson son of my daughter Eliza the sum of two thousand two hundred guilders considering what I have already advanced for his education and maintenance equal to any claim his mother could have on my estate. There is a tone of discontent in the phrasing of this bequest suggesting she was disappointed in her grandson. 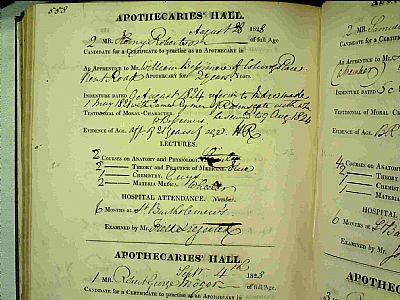 Henry was licensed by the Society of Apothecaries of London in 1828 [Society of Apothecaries (London), Court of Examiners Candidates’ Qualification Entry Book 1826–29, 558 & 619], a qualification which required a five-year apprenticeship and which was the standard route to becoming a general medical practitioner. However, he had only passed the Society’s examinations at the second attempt, seven years after he had been first indentured.

Thanks for this image to volunteers at Apothecaries' Hall, London.

Henry joined his father in Demerara in February 1832 and was well liked by the colonists, but his father regretted ‘that the bent of his mind is decidedly against following the profession for which he very nearly qualified himself. If he would only agree to follow the medical profession he might ere now live respectably settled in this colony.’ [NLS GB233/MS19332/f21, Gilbert Robertson to Doctor Traill, Liverpool, 23 October 1832.] In fact, Henry had qualified but his business as a ‘surgeon and apothecary, dealer and chapman’ in London had failed and bankruptcy proceedings had followed [London Gazette, 15 January 1833]. He subsequently returned to Britain and was in practice again by 1841, ending his life in modest circumstances.