Link to Cameron of Glen Nevis on Ancestry  (subscription required)

John Cameron[1782-1862] of Glennevis came to Berbice in the early 1800s, forming a partnership with his kinsman Donald Charles Cameron of Dawnie, for which accounts survive for 1816 to 1840, detailing shipments to Europe of coffee, cotton, rum and sugar, plantation management, sale and hire of named negro slaves, and dealings in general merchandise, including cattle [NAS/CS96/972-981]. In 1835 he was listed, described as ‘John Cameron of Berbice’, as one of the five principal landowners in the parish of Kilmallie, Inverness-shire. His older brother, Patrick, was ‘of Glennevis’. [NSA, Vol 9, p121]

He had a number of children with Elizabeth Sharpe in Berbice. She was a free coloured woman, who appears as the owner of 8 slaves in the slave registers for 1817, 1819 and 1822.

The five sons all emigrated to Australia in 1853/54, while the two daughters, both unmarried, had returned to Britain with their father to live in St Helier, Jersey. 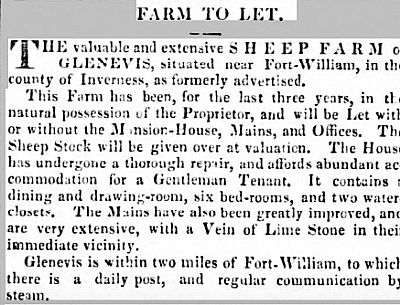 Between 1839 and 1842 John Cameron improved the farm of Glen Nevis and repaired and refurbished its mansion house. He died in Pimlico, London, in 1862.

Alexander married Ellen (or Elizabeth) von Raeder in Berbice. She was, from her appearance, probably a mixed-race daughter of Martin Mattias Rader.