The mound at the site of demolished high rise flats, between Dumbarton Road and Plean Street, Yoker, Glasgow

The changes to Glasgow's skyline over recent years has been in the media a great deal. While we decry historical buildings being demolished, we welcome the demise of those not of historical interest. And therein is something of a dilemma and contradiction, all of which can be argued is subjectively interpreted and in the eye of the beholder. As Glasgow struggled to remedy its urban sprawl and slums, it found the solution in large scale demolition and creation of new satellite towns, new suburbs and modern high-rise blocks. The social upheavals offered both opportunities and distress. Fresh starts and broken communities. But overall there was a sense of progress epitomised by those residential blocks rising across the Glasgow skyline. All this formed but a part of a grander scheme of redevelopment and highways across and around the city which became known as the Bruce Plan after the then city engineer. It certainly made a tremendous impact. But with hindsight we are very fortunate that it did not reach anything like full fruition. If it had, we would hardly have any historic buildings in the city at all. 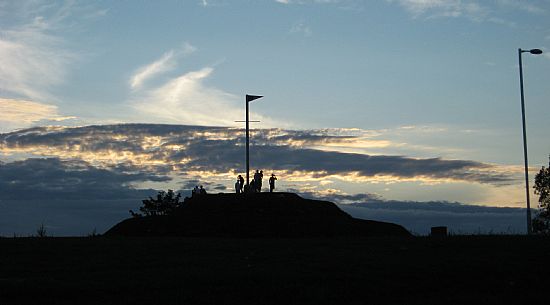 But back to the highrise blocks. They certainly resolved the problems of housing, particularly in areas of slums. But communities were often disrupted. Over time, people in them, particularly upcoming generations, moved elsewhere. Those that stayed and those you moved in, tended to have little sense of community or social responsibility. New social problems developed. The buildings were rarely well kept and they decayed beyond viable renewal. One after the other has been demolished.

People like photographer Chris Leslie have created very interesting records, finding an eerie aesthetic as they became more derelict and eventually gutted. Some people have stayed until the bitter end, unsure of their future as change happens around them.

Instead of presenting another picture of half demolished buildings, I have chosen this one. The site is in Yoker just off Plean Street above Dumbarton Road. The tower block has gone. In its stead is simply a mound. But it marks the spot and a symbolic flag pole asserts a certain significance. And the community have happily related to that raised open space as their meeting place.