Edinburgh is an extraordinary city visited by millions of people from around the world. The Old and New Towns form one of the most beautiful cityscapes in the world. They were inscribed by UNESCO as a World Heritage Site in 1995. The unique character of the city comes from the striking contrast between the medieval Old Town and the Georgian New Town, with each area containing many significant historic buildings. The two areas are in perfect counterpoise; the old medieval town leading up to the castLe; the “new” town elegantly laid out to the north below it. Calton Hill is one of the intermediate and pivotal areas and a good vantage point to take it all in. Below it (just out of sight in this picture) is the Royal High School, currently the subject of great consternation as it is threatened by drastic extensions and alterations. 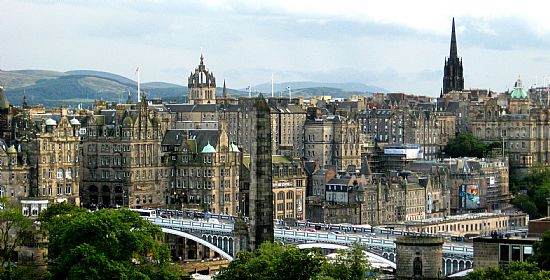 This view shows the extremely varied tightly packed townscape of the Old Town. But while varied, it maintains a homogeneity in materials and form. It imbues a rich texture. Just one step wrong in terms of design and intervention and that all crumbles. That very character which all Scots love and to which millions of tourists flock would be compromised and devalued. The recent threats to that integrity may not be malicious, but they indicate very contrasting values based on commerce and architectural taste. The proposals for the Royal High School are a case in point.

The very designation as a World Heritage Site adds great kudos to the area and with it strict criteria for interventions. Not only have many local people and conservation groups become very concerned at these recent disruptive proposals, but so has UNESCO which awards sites this designation. Officials have told the UK Government of their “strong concern” about the level of protection for the Old and New towns after being lobbied about a string of controversial projects. The world heritage body has intervened after a team of international advisors warned them of a “significant threat” from new developments.

The Architectural Heritage Society of Scotland has been one of the concerned groups that has been very vocal in its condemnation of inappropriate developments, in particular that to the Royal High School. But just look at this scene. How could anyone permit anything to disrupt and compromise it?
http://www.ewht.org.uk