Buchanan Street is the main commercial artery from north to south. As you walk its pedestrianised paving you are entertained by the sounds of buskers or by watching the spectrum of society do much as you are – except that most of them are more engrossed in the bargains and fashions or getting back to work in time. Sometimes you may see a living statue on a pedestal and you pretend not to notice, but he usually notices you averting your eyes and his eyes, the only part of him that moves, accusingly asks for at least a few coins in payment for his rigid efforts. 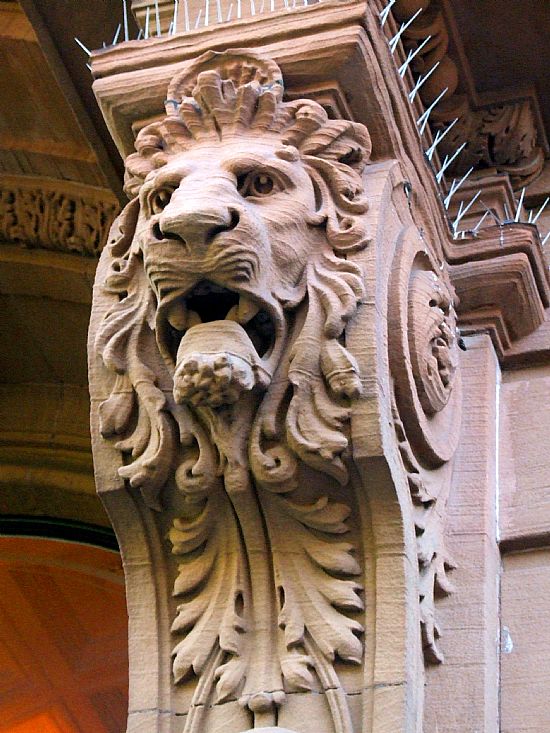 Living statues are not only to be found along the street. We may amend the definition to include the many of sandstone and bronze that peer down at us from the streetscape's loftier levels. The sheer variety is impressive as is the rich detailing of the façades. It is worth contemplating the exuberance of the designs and the motivations for such costly embellishment up there where so few people would see them properly - until an equally tall neighbour was built, or zoom lenses became available. One can imagine that the building’s owner commissioned such work knowing that someone would build opposite one day and that he would be able to claim that, although his building was now not as high, it already had fine design and artwork.

We are often encouraged to look up to appreciate such features. It is satisfying though to know that not all are way up there. This is one such building.

Nelson Mandela Place is at the crossing of the north south axis of Buchanan Street with West George Street. Its name acknowledges Glasgow's concern for the South African leader's plight in jail.

This building has had various identities and is now a restaurant. A pair of fearsome lions peer out from each side of the Nelson Mandela Place entrance, their manes morphing into the ubiquitous acanthus leaves, in turn sprouting from the very sandstone that the structure is built from. And the great thing about these lions is that they are at street level. Fearsome though they may be, they have been challenged by mere pigeons and sport crowns, not as kings of the wild, but for defence against them. Cleaning has been extensive, fortunately stopping short of going a step to far, but unfortunately exposing the grain of the sandstone.

This is an “A” listed building. The listing text tells us that it was built as The Liberal Club, later becoming the Royal Academy of Music and Dramatic Art. The architect was A. N. Paterson of Campbell Douglas and Paterson, who designed it in the Edwardian Baroque style. It was built from 1908-10. The interiors were by Wylie and Lochhead with Guthrie Wells and Scott Morton. The plasterwork was by George Bankart.