The creation of the new Scottish Parliament is well documented. Before we discuss the modern building, lets briefly turn to what could have been. I raise this not to decry the new building, but to consider an alternative and thereby gain a sense of reference. On the lower slopes of Carlton Hill in Edinburgh is the unoccupied Royal High School. That is currently the subject of much debate and dissatisfaction against proposals to turn it into a hotel complete with extensive extensions on each side in a curved brutalist style. A preferred option is to convert it to a music school, with much less drastic intervention. The Architectural Heritage Society of Scotland has been at the forefront of objectors to the very drastic hotel option. I raise all this now as another name for that building is New Parliament House. That name came from proposals in the 1970's to use it to house a devolved Scottish Assembly. With the passing of the Scotland Act of 1998 and devolution in 1999, it was again suggested that the new Scottish Parliament be housed here. Eventually, however, the Scottish Office decided to site the new legislature in purpose-built premises in the Holyrood area of the Canongate.

We now turn to Holyrood, the Scottish Parliament. 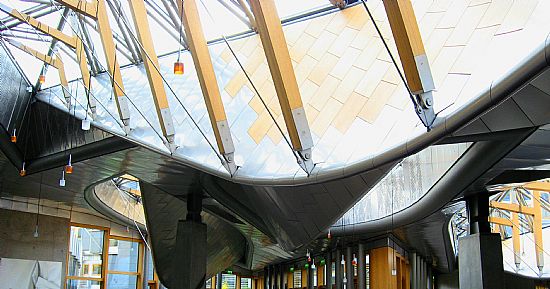 The design was put out to international competition. The Spanish architect Enric Miralles was selected with EMBT/RMJM (Scotland) Ltd as a joint Spanish /Scottish joint venture. When I visited an exhibition of the proposals at this early stage, I saw swirling coloured pencil lines that could be interpreted as windblown leafs, swirling water, upturned traditional boats or other images. Little to show how the building would work. I still needed convincing.

Building began in 1999. From the outset, the building and its construction have been controversial. The choices of location, the architect, the design, and the construction company were all criticised by politicians, the media and the Scottish public. Scheduled to open in 2001, it only did so more than three years late with an estimated final cost of £414 million, many times higher than the initial estimates.

The building certainly attracted a great deal of criticised and scepticism through that period and still does. But it has also become to be loved as our own Parliament. I have visited it several times, seen Parliament in operation and made use of the committee rooms and public spaces. I have even sat in one of those quirky protruding window seats. While I can still find some aspects to criticise, it has really grown on me. It is no ordinary piece of architecture. It is an organic living environment within which Scottish society discusses, sometimes heatedly, its future.

My photograph shows the main internal concourse. Those swirling pencil lines have transformed themselves into sweeping metallic leafs, (or are they aeroplane wings?), that reach down to you, sunlight finding its way between them and bringing the outside in, right there in the centre.