Dunblane Cathedral is one of Scotland's oldest and most important surviving medieval churches in Scotland. It was was founded in about 1150 by King David I. The oldest and most striking part of the cathedral building is the tower built of red sandstone. It is unusually located, not at the west end or at a central crossing point, but above the south aisle. Contrasting with it is the west front in Gothic style which forms the grand processional entrance into the church. 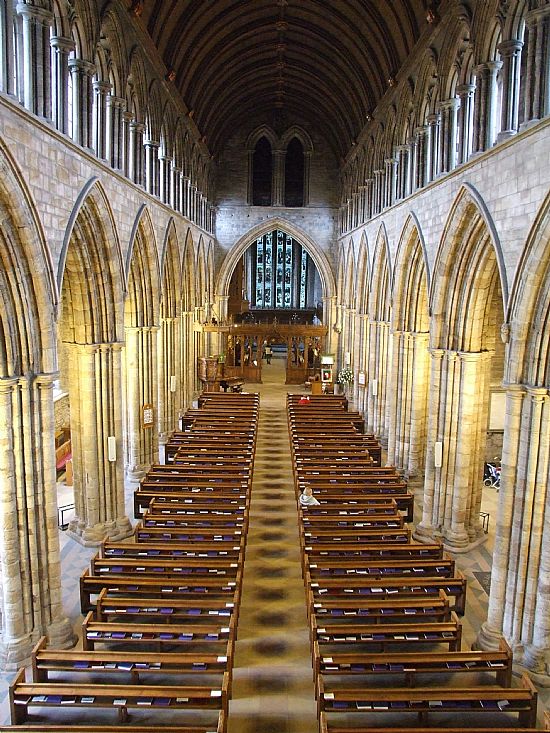 The luxurious interior furnishings were torn down during the Reformation and the cathedral became the parish church for Dunblane. The congregation only used the chancel and the nave was left to decay. It is pointed out when you visit it that the nave walls are more worn and weathered inside than out. That is because the nave stood for more than 3 centuries without a roof open to the elements after it collapsed in 1622.

The first church here was probably built in the 7th century by monks from the Isle of Bute, who came here carrying the bones of St Blane after their island home had been raided by Vikings. The first cathedral was built in the early 12th century.

In 1816 architect James Graham was called in to restore the chancel. It was not until 1886 that the congregation grew too large for it and the nave was restored under the direction of Sir Robert Rowand Anderson between 1889 and 1893. A later restoration between 1912 and 1914 was carried out by Sir Robert Lorimer. The choir stalls and organ case are by Lorimer. Some great stained glass work is by Clayton & Bell, Gordon Webster, Douglas Strachan, C E Kempe, while the six magnificent choir windows are by Louis Davis.

We tend to think of our older buildings as authentic creations of history. We also tend to think of the role of the conservationist and restorer as maintaining that or returning a building to a specific point in that history or at least arresting decay. Many may be surprised at how much “restoration” is an interpretation of what was there with a degree of new work added. Anderson and Lorimer have done that here so well that the ancient legacy is maintained with new intervention not necessarily that subtle, but certainly true to the inherent qualities of the building.