This almost triangular castle, near Glecaple on the River Nith and Dumfries, has stood surrounded by a moat at the edge of the Solway Firth for 400 years, guarding the south extremities of the Scottish Kingdom. Its purpose, for defence in times of conflict, is most evident in its form, but one discerns architectural features such as grand hearths and pediments over windows that allude to days of comfort and sophisticated grandeur. Moats still retaining water are not common in Scotland. Today we consider it as picturesque and enjoy the well mowed lawns, but in tougher times this was a refuge isolated from the perils of everything from the weather to rampaging enemy armies. 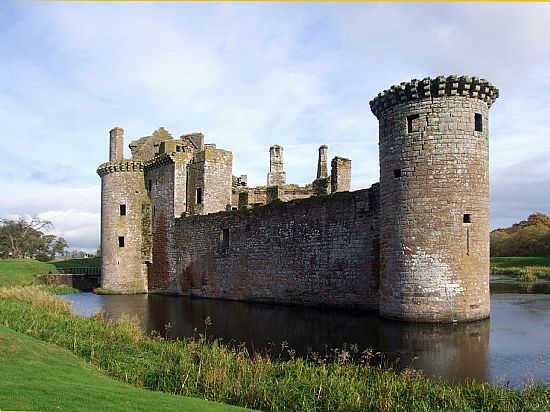 The castle's website tells us that in 1220 Alexander II needed to strengthen his defences on the Scottish marches and granted what had become his estate in the south west to Sir John Maccuswell (Maxwell). The castle changed hands numerous times over the centuries of strife, but the Maxwell lords mostly retained ownership for the next 400 years before it passed through inheritance into the Herries family and to the Dukes of Norfolk. In 1946 it was passed over to the state by the 16th Duke of Norfolk and although currently owned by Lady Mary Mumford's sister Baroness Herries, it is now operated and managed by Historic Scotland. 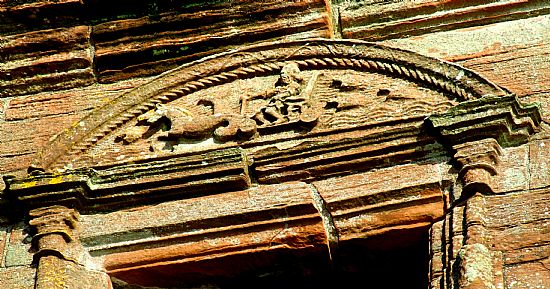 The classical facade facing the inner space has some interesting features including some carved tympana of window pediments. This one depicts a sea god, possibly Greek, being pulled across the swells in a sea chariot by hippocamps, mythical horses with fish or sea-creature tails. The link to the sea was closer at one time than it is today. The castle was built was built to control the waters of Solway Firth.