Glasgow's hill of towers is a sought after address for home owners and businesses. It is actually a concentration of interesting, generally elegant houses spread across several streets and lanes with Park Circus in the centre. I took this picture in 2009 while one of the key buildings are undergoing extensive refurbishment. Even such historic built environments are constantly changing. In this case it was the modern office block adjoined to the church tower which was being revamped. That church tower, seen on the right, is Park Church built 1856-1858 to designs by J. T. Lochead. The houses around it followed in 1872. Only the tower remains, the church was demolished in 1968 and replaced by an office block. It is that office block that was being completely revamped at the time of the photograph. 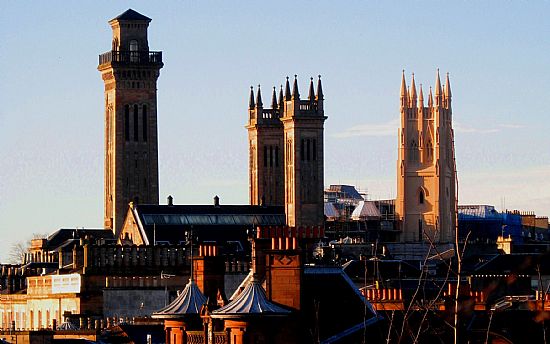 Even designate Conservation Area forming a concentration of historic buildings we see conflicts of ideals. Most recently we have seen new proposals for flats and townhouses to “fill in” a gap site on the north side of the hill.

The Park District was part of a planned development created by Charles Wilson in the 1850’s. The three towers to the left belong to the same building. Wilson won the architectural competition to design the Free Church College, in 1856. This building was later known as Trinity College, a name retained when converted to flats in 1985/1986.