James Templeton was a farmer's son who had worked in a draper's shop in Glasgow. He later got jobs in Liverpool and Mexico, eventually getting sufficient money to start his own business on his return. That was as a shawl manufacturer in Paisley and at about this time he invented and patented a complex pattern making process for chenille. He realised that this could be applied to carpet manufacture and opened a factory near Glasgow Green. For this he turned to the leading Scottish architect, William Leiper. What better for a carpet factory than inpiration by the late medieval Palazzo Ducale (Doge's Palace) in Venice but Leiper would also have been aware of the colourful phantasmagoria of designs being used for the pavilions in Glasgow's 1888 International Exhibition showground in the west end. The flamboyant glazed brick, vitreous enamel tiles, red brick and terracotta of the façade evokes the rich Oriental-influenced patterns of the carpets the factory produced. 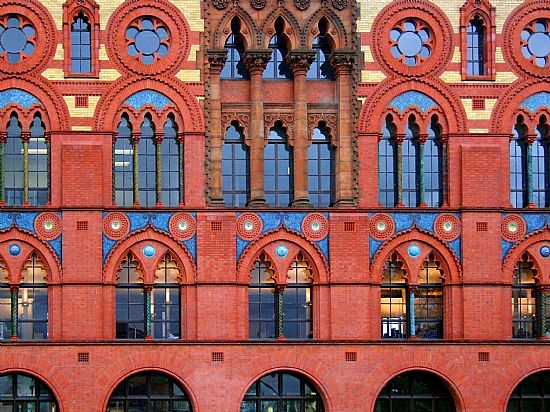 Construction began in 1888. It was interrupted a few years later when a wall collapsed during high winds and with some fatalities. This was attributed to inadequate scaffolding.

During this period, not just homes, but commercial and industrial buildings were being richly designed and ornamented. People such as John Ruskin were a great influence on taste. What you see here is an amazing building that could well translate into a Victorian patterned carpet.

During the 1920's, 1930's and 1960's various alterations and extensions were made, all allowing Leiper's original design to predominate. 1984 it was converted to a business centre and in 2005

This amazing façade in many ways presents the backdrop to Glasgow Green and the Peoples Palace, but you are always reminded of Templeton and his ambitious carpet design and manufacture.