As you walk around the great Usher Hall entrance on Lothian Road you proceed down Grindlay Street passing its side elevation cowering behind its blank glazed screen. It is really only once you get beyond it that you become aware of the Royal Lyceum Theatre. The building is rather typical of Edinburgh's Victorian designs with classical reference all in white stucco, painted. At street level though it has a modern glazed entrance space, added in 1986 by Simpson and Brown, projecting into the pedestrian concourse. While it is not architecturally a strong statement, it actually appears to carefully compliment the original design rather than distract from it. 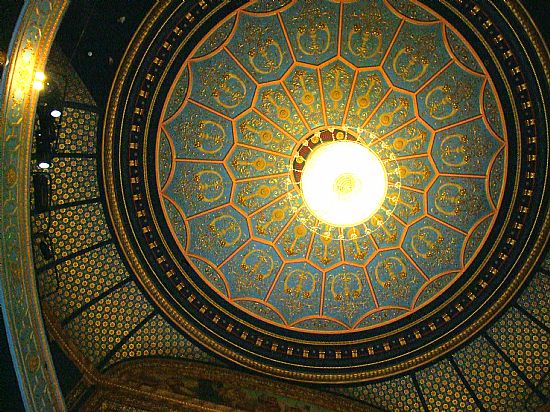 So far, rather ordinary. But as you enter the main auditorium, you experience something magical.

My photograph was taken looking straight up into the magnificent dome. Pure Victorian exuberance. Rich use of colour and classical motives. The ornate semi-circular galleries support by slender Corinthian capitaled cast iron columns rise up and up towards it, the uppermost one being that for stage lighting. A central grand chandelier floats up there in glowing crystal illumination. Over the stage proscenium is a classical scene. There is so much to distract you from the show.

The original design was by C. J. Phipps in 1883 to which various alterations have been made. It is listed “A”. The listing text adds a Statement of Interest which notes : Lit by electricity from its outset in 1883, the Royal Lyceum Theatre is an excellent example of C J Phipps's skill as a theatre architect. Designed in a classical style in keeping with the predominant architecture of the city, it was built at a cost of £17,000 for John B Howard and Frederick W P Wyndham, who would later form the famous theatre owning and production company, Howard & Wyndham Ltd.