Argyle Street is a popular city centre shopping area, becoming pedestrianised after leaving the Trongate and heading in the direction of the Highlander's Umbrella below Central Station. The Buck's Head Building at number 63 is hardly noticed by most of those who scuttle below seeking bargains or musical appreciation as buskers. At street level it is just another shop front. But look upwards and you see an amazing façade. 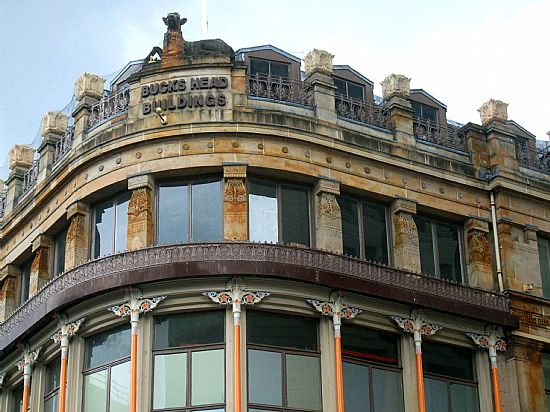 It is an “A” listed building by none other than Alexander Greek Thomson from 1863. The listing text interestingly notes : Built on site of former Buck's Head Hotel. Forms a watershed in structural logic, iron-framed (McConnell's patent) and disguised yet with applied IRON columns. Thomson's warehouse designs made reference to those of David Hamilton. Similar ornament was employed earlier by Thomson at Grosvenor Building (1859) and the Cairney Buildings (1860), and later at the Grecian Building (1865) and the Egyptian Halls (1871-3), Glasgow. The modern extension to S in Dunlop Street has followed the 1864 design in a more severe and lower key.

It further describes it as having : Pilastered windows with Anthemion detail at 1st floor with chip carving to lintels. Applied, tapering cast-iron columns with wing-like capitals between 1st and 2nd floors. Decorative cast-iron balcony jettied at 3rd floor. 3rd floor windows divided by stone pillars with tapered necks, chip-carved and with capitals. Frieze with discs and cornice. Parapet with square finialled dies, divided by decorative cast-iron railings. Ashlar panel at angle inscribed "Buck's Head Buildings" and crowned by a buck couchant statue. Gabled dormer windows to each bay, set back between dies.

The Victorian penchant for cast iron and the developing understanding of its combined decorative and structural potentials enabled new ways for integrating this with the more familiar sandstone. Thompson gained his appellation of “Greek” through his fondness, almost fanaticism, of Greek adornment. Structurally it is very different to such sources of inspiration, but his unique style is most striking and has projected him to not only as one of Scotland's most important architects, but worldwide recognition.