Inveraray Castle has a certain fairytale charm about it. This is quite rare in Scotland where defensive castellations are more the order of the day. Castellations certainly do occur on its turrets, but the sharply pointed conical roofs at each corner are more prominent. 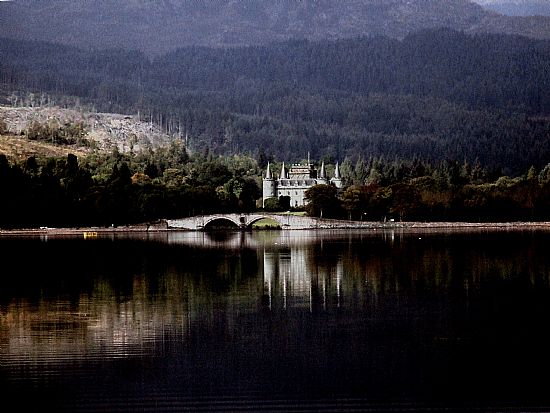 My photograph from across Loch Fynne in a slightly hazy light gives it a more mystical aura. It looks as if it can cope with anything. Except nerby deforestation. The forests that surround it are naturally part of the economy of the estate and surrounding area so we cannot decry that they are utilised, but it does seem to affect the picturesqueness of the scene. 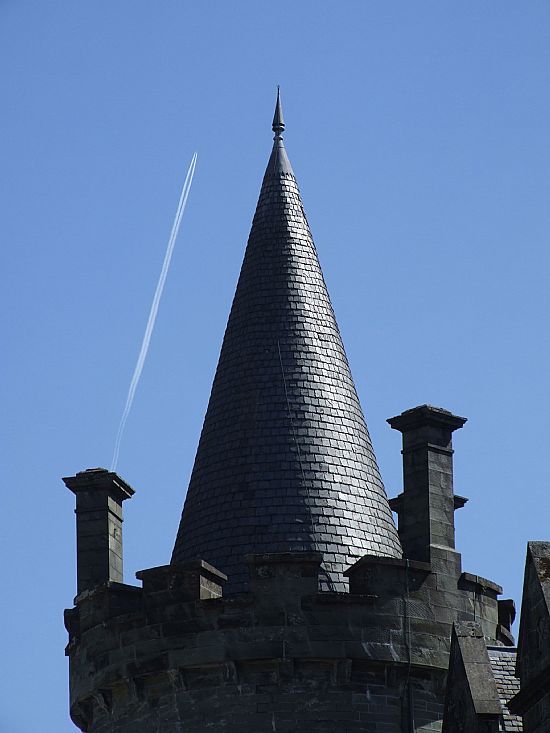 A castle by this name has has been standing on the shores of Loch Fyne since the 1400s. The impressive castle we know today was inspired by a sketch by Vanbrugh, the architect of Blenheim Palace and Castle Howard in the 1700s. Vanbrugh died soon afterwards, but the great architect's gem of an idea became the base of the house which the 2nd Duke was eventually to build. The foundation stone was laid in 1746 and what followed was the construction - to a design by the architects Roger Morris and William Adam - of a truly modern, baroque, Palladian and Gothic-style castle, architecturally before its time. 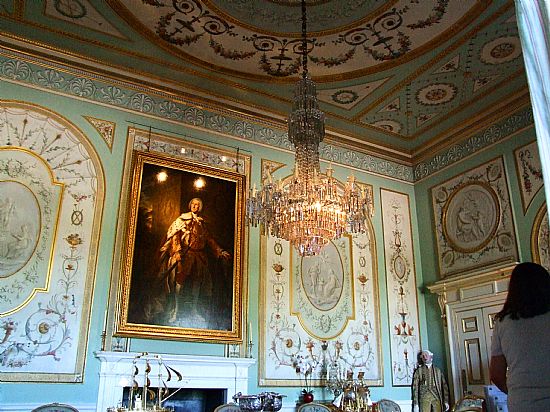 Both Morris and Adam died before the castle was finished and Adam's sons, John and Robert, brought the castle to completion 43 years after the first stone was laid. 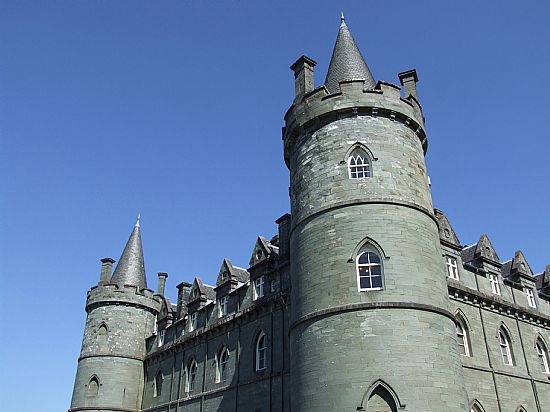 The castle we know today was the result of a fire in 1877, which resulted in the addition of the third floor and conical roofs on the corner towers.

But this was not the only fire that the castle endured. To pick up on that part of the story we need to first consider the current heirs of the estate and the challenges that they are met with. The 12th Duke of Argyll, who has died suddenly aged 63, was Chief of Clan Campbell and Scotland's second most senior duke; since 1996 he had been Lord Lieutenant of Argyll and Bute. On succeeding to the dukedom on his father's death in 1973, the Duke was obliged to meet colossal demands for estate duty, and two years later was faced with a devastating fire ….Putting a brave face on the fire - and on the loss of, among other treasures, a magnificent painting by Gainsborough - the Duke recalled his much-loved mother's pragmatism, and was thankful she had instilled in him her belief that material things are of little value. He had been brought up, he said, never to count on anything but what he could himself achieve. Rather than despair, he launched a worldwide appeal for £850,000 to restore the castle. Fund-raising organisations were set up in America, Canada, Australia and New Zealand, and before long money was pouring in. For some months the Duke and Duchess and their two young children lived in the castle basement with no electricity or running water, working all hours to restore the fabric of Inveraray. Three years after the fire, in 1978, the Duke was able to reopen the castle to the public, and was soon welcoming as many as 100,000 visitors a year.

Now that is truly impressive.