Many people may simply recognise this building as the backdrop to which Wellington sits astride his horse wearing a traffic cone. But this building is much more. Situated as it is in this prime location centrally in Exchange Square in the city centre, it is a very popular place to rendezvous nearby for coffee or simply past which to walk through to Buchanan Street. Or enjoy some unusual artistic creations inside.

In winter the space is lit with a web of decorative lights as we see here. 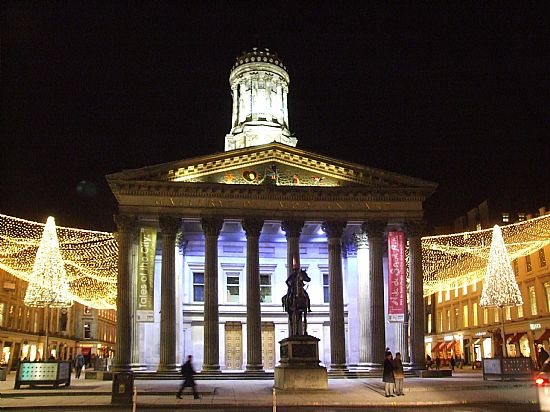 This classical edifice is now the Museum of Modern Art, MOMA, and has a library in it. Before that it had comfortably become the Royal Exchange, a role that it seems to have been designed and built for. But it was actually, before alterations and enlargement, something else. The east end was originally the Cunninghame Mansion.

The Cunningham Mansion dated from 1778. The conversion to the Royal Exchange was done from 1827 to 1830 to the design by David Hamilton. An attic, also by Hamilton was added in 1880. Sculptural features are by James Fillans.

The Stirling Library was housed here until 1993. Since 1996 it has been the Museum of Modern Art in which guise we know it now. That pediment has been redecorated with a modern glass mosaic. Inside the grandness of the main hall is still very evident in the columns, cornice and tall windows. In this scene one appreciates the prominent situation within Exchange Square. Behind it is the Bank of Scotland building, until recently a bookshop looking onto Buchanan Street. Around it are the buildings that define the square, some elegant if plain; some in need of attention. Some are restaurants. 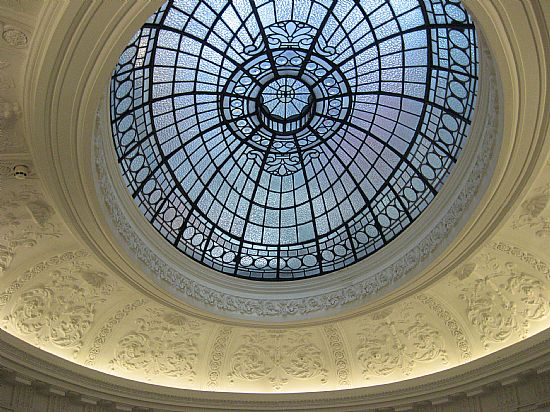 This elliptical space is covered by an elegant domed leaded glass rooflight encircled by a plaster frieze and a deep classical cornice from behind which modern lighting ensures enjoyment in all conditions.