Culross is Scotland's most complete example of a burgh of the 17th and 18th centuries. It sits on the northern shore of the Firth of Forth. Highlights of the village include Culross Palace and Culross Abbey, but the main attraction to me is simply the tightly packed houses, some of natural stone, others harled in white or red. 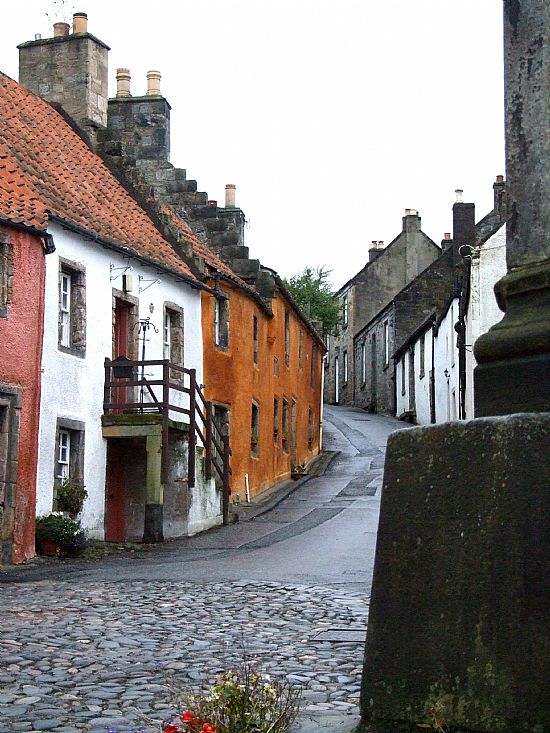 This picture was taken at the Mercat Cross. The cross itself can just be seen framing the right side. It was reconstructed in 1902 to a design by J.W. Small, executed by Alexander Neilson. A replacement shaft and head were mounted on the original octagonal base, dating from about1600. The structure is now category “A” listed and a Scheduled Ancient Monument. The faces of the cube-shaped head feature the Burgh arms, the Provost's initials, a monogram of King James who granted the status of Royal Burgh and the arms of Sir James Sivewright, who paid for its restoration. The unicorn, a Scottish heraldic motive, that sits on top was copied from Stirling Mercat Cross and was given by a local laird to commemorate the coronation of Kind Edward VII and Queen Alexandra.

But while the cross may provide a focus point within the square, it is the space itself and the houses that are most significant. When taking this picture, I had to avoid rows of wheelie bins. It was bin day and it was difficult getting a photograph that took in the intended ambience without them.