Paisley was at one time an important centre for textile mills. The ubiquitous Paisley Pattern is known world-wide. Today only two such mill buildings survive here. Abbey Mill nearby is now a business centre and has a museum dedicated to the local textile industry. The one that I show here though is Anchor Mill. It has been converted to flats with some business units. 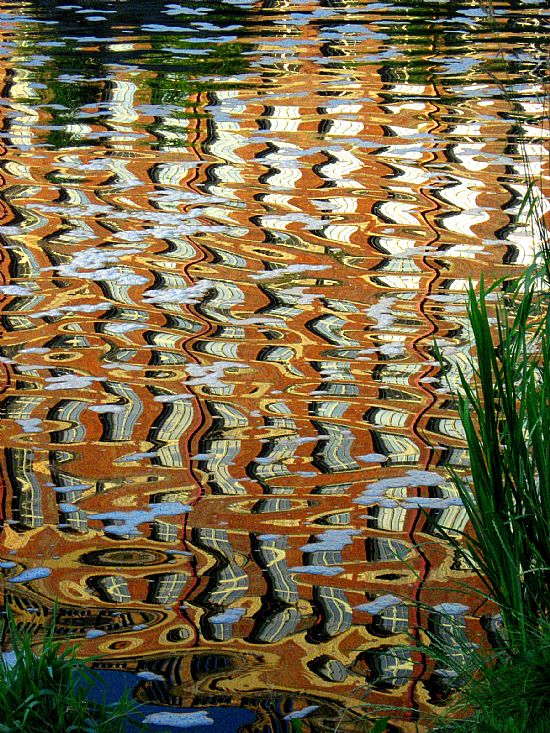 I am always fascinated by the way buildings relate to their environment. That can be historical, social or aesthetic. Anchor Mill overlooks the Hammills, a cascade on the White Cart Water right in the city. The water above and below the cascade can be quite still and mirror-like sometimes and reflects the mill. The day I took this picture, the water was rippling and the reflection of the mill looked intriguingly abstract.

Anchor Mills closed in the 1980s and rapidly fell into dereliction. Its abandonment and neglect was a physical illustration of the wider industrial and economic decline of the area.

The Princes Regeneration Trust describes it further : The area played a key role in the global cotton industry but due to rapid industrial decline, the Mill became empty in 1980. After much difficulty finding a way to restore the site, the local authority contacted us in 1999 to find a viable contemporary use that would make a major contribution to the regeneration of the town centre. It was clear that this project could only succeed with dedicated and collaborative partnership working, so we set up a steering group that would prove vital in driving the project forward. This involved the owner, Renfrewshire Council, Scottish Enterprise Renfrewshire and Historic Scotland.

Funding came in from Historic Scotland and Scottish Enterprise Renfrewshire. The construction work began in June 2003. The restoration respected the original structure of the buildings and made good use of the final central, colonial style atrium to maximise natural light and ventilation.

In June 2005, our President, His Royal Highness, officially opened the site.

And so this partnership between various bodies not only saved the building for future generations, but managed to turn it to viable and sustainable alternative use.