The Kelpies, Forth and Clyde Canal, Falkirk

The Kelpies certainly bring the concepts of building, engineering and art to a new level.

A kelpie, as every Scot should know, is a form-shifting water spirit inhabiting our rivers, lochs and other water courses, in this case, the Forth and Clyde Canal. Kelpies have been known to appear in human form, usually female, and can be a bit menacing. But they are more often to be seen as horses. It may be that such tales have arisen to deter children away from dangerous stretches of water, but they also appear in ancient folklore. Our pair of Kelpies rise very impressively from the Canal as it passes through the edge of Falkirk, near the River Carron and the M9. At 30 metres in height, they can be seen from miles around, expressing raw energy in shimmering steel. This medium, this use of metal, is what made Falkirk a world centre of cast iron products. The Forth and Clyde Canal linked it to Edinburgh and beyond to the east and Glasgow and beyond to the west. 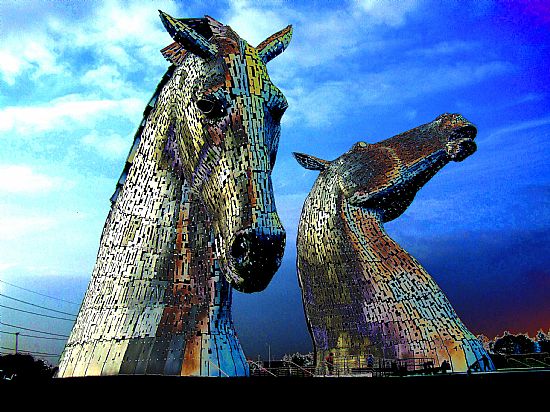 These gigantic horses form part of the Helix Project and were chosen to symbolise change and transformation. And of course they remind us of the working draft horses which towed the barges.

Sculptor Andy Scott worked on them over several years using contemporary methods. 1:10 scale maquettes were made first and these have been viewed at such places as Edinburgh Airport and Chicago, travelling ambassadors of the final product and of Scotland.

I played with the images a bit to deepen the magical mystery ambience.