Riddles Court is at the end of one of those intriguing closes off the Lawnmarket on the Royal Mile in Edinburgh, up towards the Castle. I got familiar with it when the Architectural Heritage Society of Scotland leased office space there. At the end of the short close is the “A” listed former merchant's house from which the close gets its name. It is owned by the Scottish Building Preservation Trust which has initiated significant restoration and some modifications to ensure more suitable usage, while preserving the historic integrity. Part of that work is to provide accommodation for the Patrick Gueddes Centre for Learning. 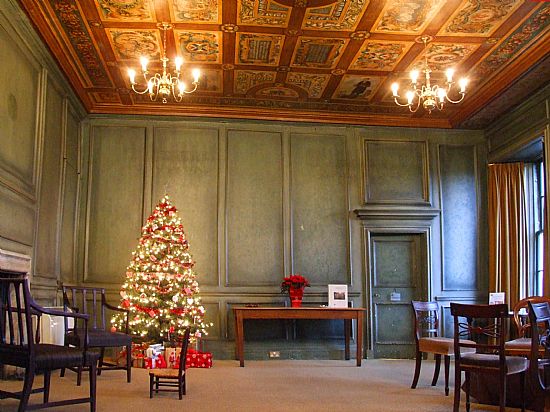 While most of us know it simply as Riddles Court, this part is more accurately 5 - 6 Riddle's Court which was Bailie John Mcmorran's House. The listing text's Statement of Interest informs us that it was built by Captain George Riddel, wright. In this block was the first Edinburgh residence of David Hume.... The rear wing of this block was demolished in the late 19th century, leaving the octagonal stair tower isolated. The Dean of Guild plans by GS Aitken show alterations, including the red sandstone pend entrance, done at this time. The remainder was restored as flats in 1958 by John Wilson Paterson for Edinburgh Corporation. To the rear are the remains of 2 L-plan houses built by Baillie John MacMorran circa 1590. James VI and Anne of Denmark were entertained in Baillie MacMorran's house in 1598. The N wing of the E house (illustrated by MacGibbon and Ross) was demolished in the late 19th century, and the S wing forms the N section of Riddle's Close. S Henbest Capper and GS Aitken reconstructed Riddle's Close and Court for Patrick Geddes (who owned the buildings) as University Hall in 1892-3. VIVENDO DISCIMUS (by living we learn), the inscription on the arched pend to Riddle's Close, was the motto of Geddes' University Hall. It was again reconstructed as education rooms for Edinburgh Corporation by J Wilson Paterson in 1964. The rear of Riddle's Close (5 and 6 Victoria Terrace) was rebuilt by George Smith circa 1840 as the Edinburgh Mechanics' Subscription Library. The Mechanic's Library was established in 1825. Contributors to the Library at its inception included Sir James Hall, and the publishers Archibald Constable, William Blackwood, and John Murray. Victoria Street and Terrace were part of Thomas Hamilton's plan for the new Southern and Western Approaches to the city; George Smith replaced Hamilton as architect to the Improvement Trust in 1834.

The Scottish Building Preservation Trust notes that the building has considerable cultural significance with rooms containing architectural features from its 400 years of history and historic connections with King James VI and Patrick Geddes amongst many others....The rooms include a Board Room with 18th Century panelling; the Geddes Room with a vibrant 19th Century painted ceiling commissioned by Patrick Geddes interconnected with a smaller breakout room with a fine 17th Century plaster ceiling; and, a larger flexible space on the ground floor with a capacity for around 70 people.

I took this photograph just before Christmas a few years ago.