Eons ago, dinosaurs wandered across Scotland, perhaps even here in front of the University of Glasgow. This life size Tyrannosaurus Rex loitered in front of the Hunterian Museum for some time. It was commissioned from Joe Cherrie, John Riddell and Kate Nelson by Dr. Jeff Liston and Dr. Neil Clark to accompany the exhibition "Walking With Dinosaurs" which had supported the tv series and book of that name in 2001. It became very popular with students and the public, particularly for graduation and wedding photographs, so popular in fact that it couldn't survive the attention and succumbed to extinction. More importantly though, during its posturing here it drew attention to the Hunterian Museum within the University of Glasgow. 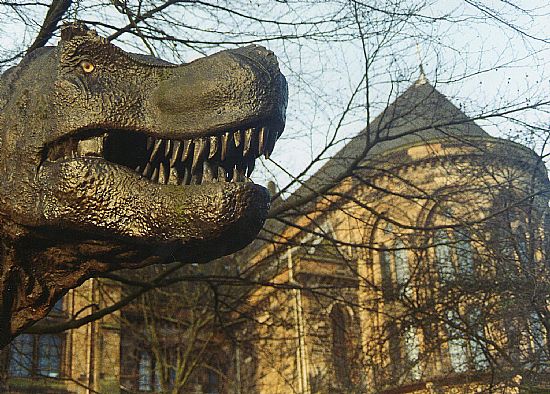 The museum houses a fine collection of various items from prehistory to the legacy of William Hunter, whose name it bears.

In 1783 William Hunter bequeathed his large collections of anatomical and pathological preparations, coins, books and manuscripts and botanical, geological and other materials to the University, along with £8,000 towards the cost of a suitable museum in which to house them. The Hunterian Museum was designed by William Stark and opened at the University's High Street site in 1807.

My photograph naturally concentrates on just one part of the grand university premises. The design by William Stark complements that of the main building in the Gothic revival style by the architect George Gilbert Scott. There is a certain church look about the edifice expressing something of the esteem then felt for research and display of valuable artefacts and a feeling that there is a parallel between earthly and ecclesiastic learning. What you see here is the tall leaded glass fenestrated wing facing University Avenue. On each side of it are the main display areas with galleries.