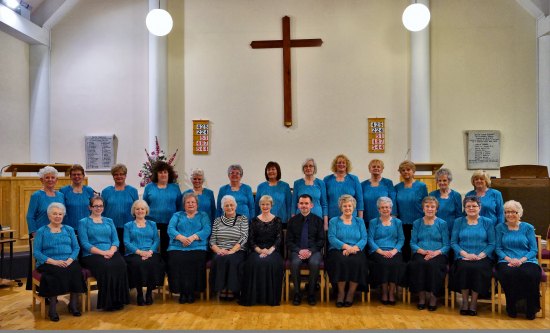 The choir was formed in May 1981 and six months later made their concert debut at the Gwyn hall Neath, with the band of the South Wales constabulary.

The choir does a lot of charitable work, and has help raised funds for various charities, the choir has appeared in concerts in England, Ireland, Holland, and many parts of the principality.

The choir has performed with international artists, such as Della Jones ,Jason Howard, Anthony Stuart Lloyd, and Gordon Back, and has also taken part in BBC programmes including songs of praise at the Millennium Cardiff,
also Lenny Henry Goes to Town.

They have shared the stage with the Morriston Orpheus, and Pontarddulais male choirs, exchanged visits with the Wexford, South Woodham Ferrers,and the Park hall male choirs, also the Stoke-on-Trent male voice choir, the Neath ladies inspired the ladies of both Wexford and South Woodham Ferrers to form choirs of their own, and the three ladies choirs have also met up to perform tri-choral concerts in Neath, Essex, and Ireland.

The choir always have a busy programme of concerts, and weddings and charitable work. this year concerts are in Neath Hospital  Dec 4th -- Plas-cwm-garw Port Talbot Dec 6th--   Noddfa Newydd,Tonna Dec 9th
and St Theoder's Port Talbot Dec 10th.,
The choir are always delighted to welcome new members it is a good way of making new friends, as well as making music, new choristers are welcome