My dad Vernon Davies, who  had a dance band in the Neath area, also played guitar in the RAF dance band during the war years, starred alongside in radio broadcasts with the late Sid Phillips and his  band who led a Dixieland jazz band and was known for such music as the "The dark town struuters ball"

In 1945 dad entered into a British  song writing contest with the song "Easter Sunday" as at the time he had just got married to my mum who was an electrician  in the WAAF and I believe the words say it all, alas dad did not win but the song that won was CRUISING DOWN THE RIVER (On a Sunday Afternoon)
- words and music by Eily Beadell and Nell Tollerton, two middle-aged women
who wrote the song and went  on to win the British song writing contest in 1945.

I thought it was nice gesture that my wife, who is chairperson and a soloist with the Neath and District Ladies choir, and I  got together and recorded it for prosperity.

Below is a photo of my dad's dance band. 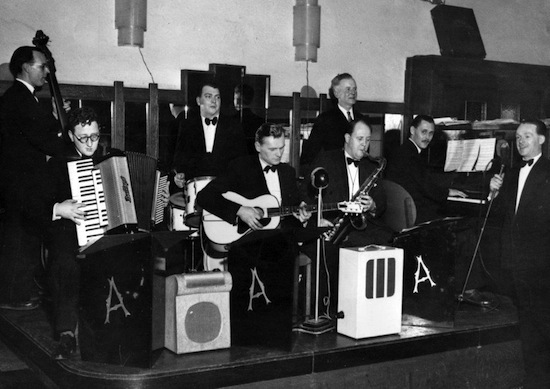