The Vale of Neath

Melincourt Falls is a spectacular 80 feet (24 m) high waterfall on Melin Court Brook, a left-bank tributary of the Neath River, located 1-mile (1.6 km) south of Resolven in the county borough of Neath Port Talbot. It is formed where the brook plunges over a resistant band of 'Lower Pennant Sandstone' in a 13 acre / 5 hectare nature reserve managed by the Wildlife Trust of South and West Wales. The falls have been drawing visitors for at least two centuries - they are certainly known to have inspired J. M. W. Turner to paint them in 1794.The falls are considered by some to constitute a part of Waterfall Country though the bulk of these falls are a few miles further northeast at the head of the Vale of Neath. 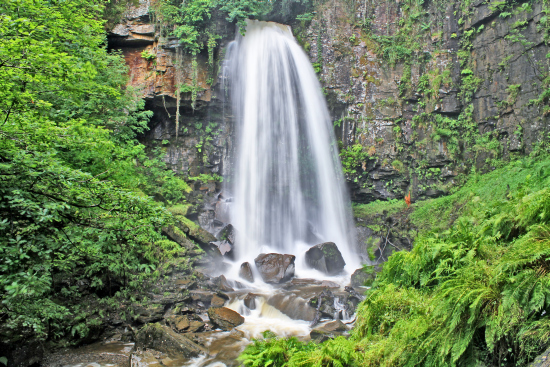 The Aberdulais Falls are found on the River Dulais at Aberdulais, near Neath in the county borough of Neath Port Talbot. The falls are formed as the river plunges over beds of hard Lower Pennant Sandstone just before meeting the River Neath flowing down the Vale of Neath. They are home to Europe's largest electricity-generating waterwheel.

The falls and associated industrial infrastructure are in the care of the National Trust in recognition of the site's value as a key part of the region's industrial heritage. Car parking for visitors is available just off the A465 road which passes the site.

The falls are considered by some to constitute a part of South Wales' celebrated Waterfall Country though the bulk of the falls are located several miles to the north-east at the head of the Vale of Neath.

Power has been drawn from the waterfall since 1584, when it first provided energy used in the manufacture of copper, using ore imported from Cornwall. The copper-works ceased to operate early in the 17th century, and the site was later used for corn-milling and later as a tinplate works. The weir and waterwheel were added during the 19th century.