The Neath Disturbance is a geological structure which stretches across South Wales from Swansea bay north-eastwards as far as Hereford in western England. it comprises a series of both faults and associated folds which were active during the mountain-building period known as the Variscan orogeny,  this line of weakness probably featured in the earlier Caledonian orogeny and perhaps reflects a more ancient line of weakness in the basement rocks.
The Disturbance gives rise to a lineament crossing the region, that is to say that it is responsible for a number of significant landscape features along its 100km length. Prominent amongst these is the Vale of Neath, a deep valley incised by a glacier during the ice ages along this line of weakness in the Earth's crust and now occupied by the River Neath between waterfall country in Pontneddfechan and Swansea Bay.
The Neath Disturbance is possibly the southernmost geological feature within Britain which can be described as following the Caledonoid trend. the phrase describes a suit of major  geological structures associated with the closure of the former Iapetus Ocean in the middle Palaeozoic era and giving rise to the Caledonian orogeny or mountain-building period. the Cribarth or Swansea Valley disturbance and the Carreg Cennen disturbance are similar features found a little further north in south Wales.
Here are a few examples of where the fault line can be clearly seen
The steep and overhanging southern faces of Dinas Rock are moderately popular with sports climbers whilst easier routes are enjoyed by organised groups in the former quarry at the western end of the rock. It is considered by some as the best inland cliff in South Wales for rock climbing. 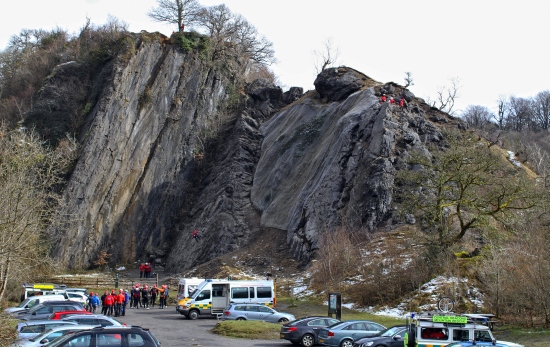 Virtually all of the falls occur on tributaries of the River Neath which occupy valleys that have been deeply incised into the landscape. It is suggested that over deepening  of the Vale of Neath by glacier ice during the succession of ice ages has resulted in these tributaries cutting down into their own beds as they adjust to a base level lower than in pre-glacial times. The underlying geology is a generally southerly dipping succession of Carboniferous age sandstones and mudstones assigned by geologists to the Marros group and formerly referred to as the Millstone grit series. Preferential erosion whereby the less resistant mudstones have been more readily removed by the passage of water, often following various forms of weathering has left sandstones forming the lips of the falls. the siting of individual falls is closely linked in many cases to the presence of northwest-southeast aligned faults which have brought different lithologies into proximity
Summary
The Neath disturbance is one of a number of compression belts which occur on the northern limb of the South Wales syncline, and caledonoid directions of which are at variance with the normal armoricanoid trend characteristic of South Wales structures.
The main structural elements of the disturbance are (1) impersistent, caledonoid folds; (2) charnoid shear-faults which separate areas of contrasting fold pattern; (3) normal charnoid faults, some of which do not break the continuity of the folds; (4) a caledonoid, sinistral, shear-fault—the Dinas fault; (5) a caledonoid, normal fault—the Coed-Hir fault.
In general, the caledonoid folds and accompanying charnoid shear-faults appear to have been formed before the Dinas fault. But local reversals of this general sequence and the partial or complete overlap of the phases indicate that they belong to a single period of earth-movement, believed to be of Armorican age. Subsequent vertical movements resulted in the formation of the Coed-Hir fault and some charnoid faults, and occurred also along the Dinas fault and many of the existing charnoid shear-faults.
The Neath disturbance is a product of the resolution of a major Armorican force from the south-south-west into a compressional force directed towards the north-north-west and a sinistral shearing force along the Dinas fault. Such a resolution was probably due to a control exerted by the sub-Devonian foundation. A similar control was being exerted during late Avonian times along part of the disturbed area. 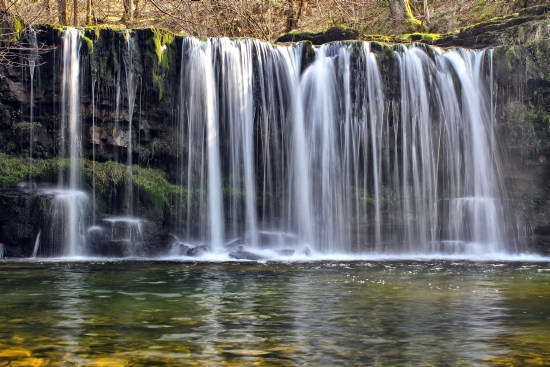 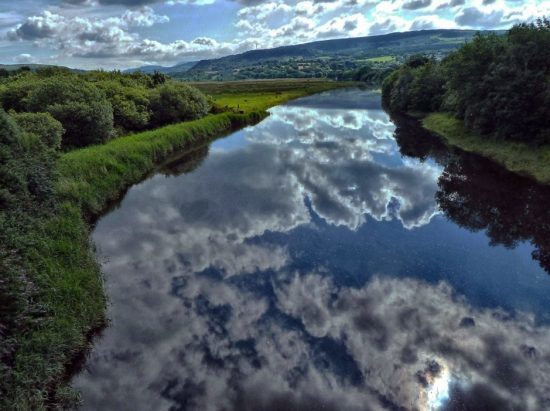 The Neath fault line follows the course of the river Neath