Mike's latest series of videos appear on our NEWS & FEATURES page.  This allows them to have greater viewing coverage.

Previous productions can be seen via the adjacent slide-out menu. 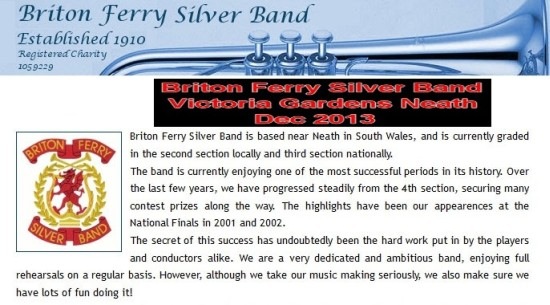 Despite the cold weather and the occasional showers of rain, the busy Christmas shoppers came into the gardens to sit and relax a while, listening to a selection of carols played by the band. 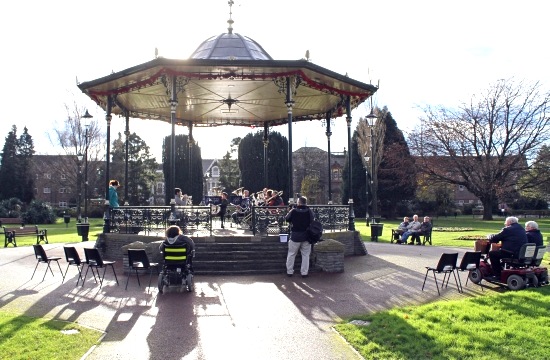 It is always nice to hear a brass band, especially at this time of the year, when you can sing-along with the Christmas carols.  It brings the meaning of Christmas closer to us all, Christmas is a time to reflect on the past year, and to think of families and loved ones both home & abroad, and also the families who are in the services who are facing conflict, on active duty on Christmas day. 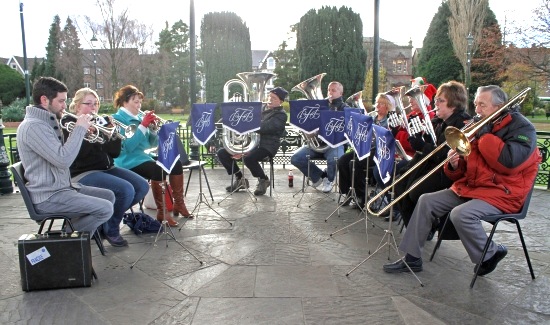 It was a wonderful concert and the band played a good selection of well-known carols.  It is always a pleasure to see the Briton Ferry Silver Band and hear them in the bandstand at Victoria Gardens throughout the year. 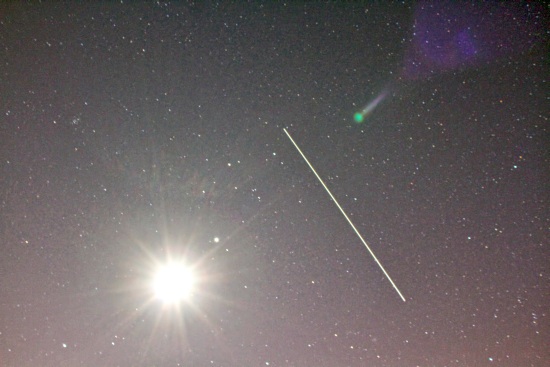 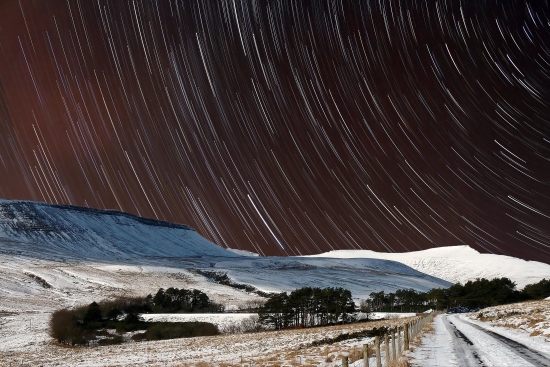 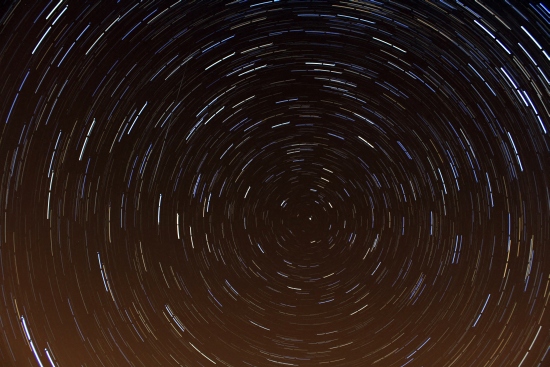 For the 2nd year running, members of the “ The  Green Dragon pub” in Cadoxton decided again this year to keep lighting up the village with a Christmas tree.   All this is all done voluntarily and donations are always relied on, and most welcomed. 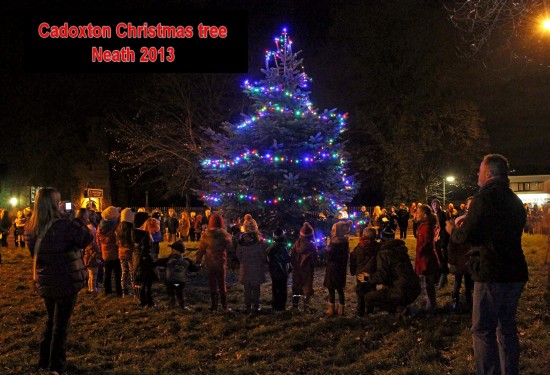 Children gather around the lit up Christmas tree

It is always good see the villagers getting “stuck in” and getting together on such occasions, having lived in the village for 40+ years the residents are always willing to lend a  helping hand.
On a frosty evening of Dec 4th the villagers came out to celebrate the traditional Christmas tree once again light up the village green. 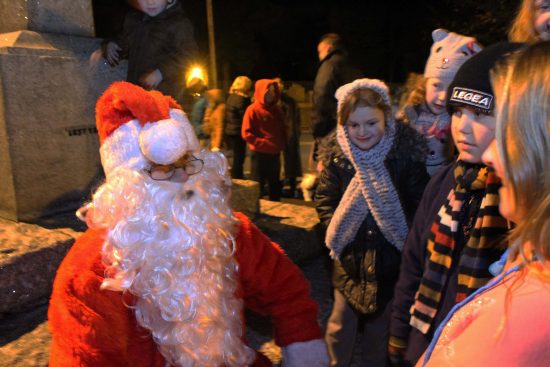 And even  Father Christmas stopped by on his busy schedule

The Art in the park exhibition which took place on Sat Nov 30th at Victoria Gardens community centre was opened by Canon Stephen Ryan, Rector of Neath. 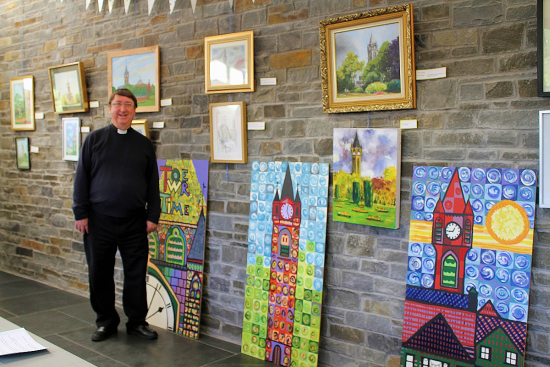 Sarah Mayberry-Thomas, Audience Development Officer -Victoria Gardens thanked all the artists who participated, and gave a talk on the various artists work.

Local artists of all ages got together during the summer to paint Victoria Gardens, including St David's church which had to include the tower.

All proceeds from the sale of the exhibition will go towards the restoration of the
tower. 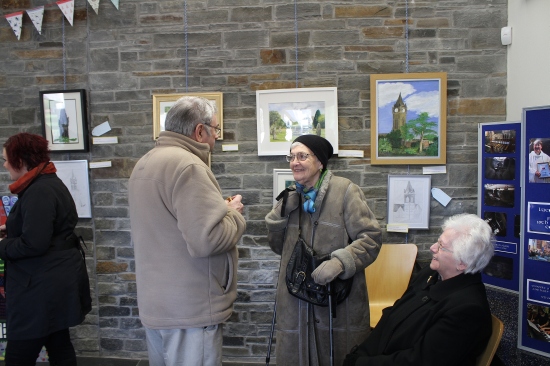 Some of the artists having a chat.

All proceeds  go to the restoration of the clock tower 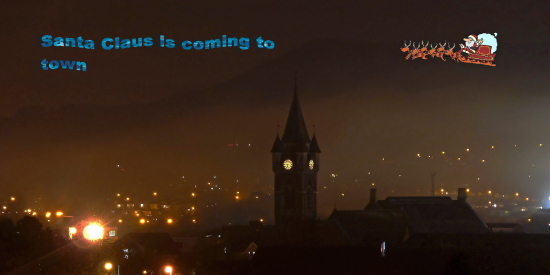 It was a bitterly cold evening, and after waiting which seemed to be hours, 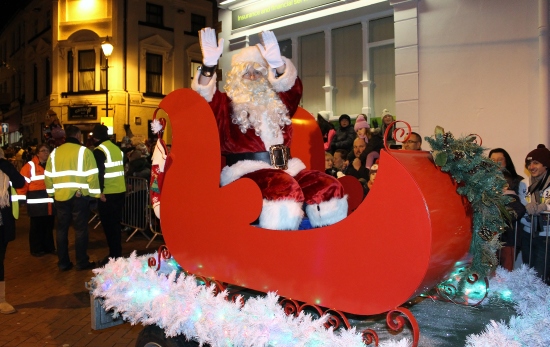 Santa  finally arrived over the roof tops and touched down in Neath much to the delight of the children, and their parents, there was a big all-round cheer as Santa appeared in his sleigh as he made his way through town. 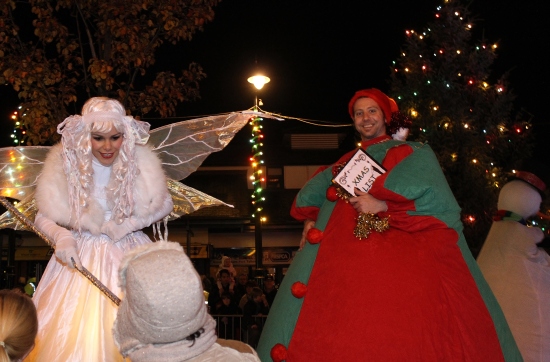 The good fairy with her elf companion 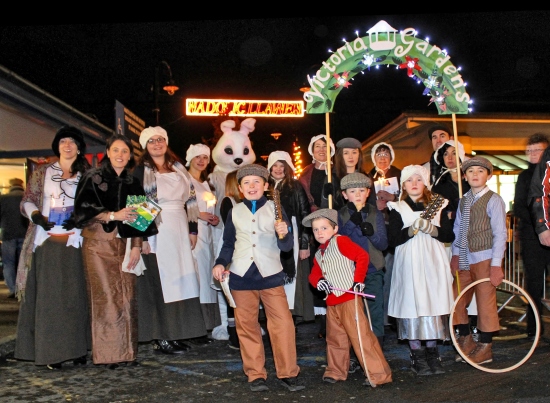 Sarah Mayberry-Thomas, Audience Development Officer -Victoria Gardens had an Edwardian theme, they looked splendid in their costumes and so did the children dressed in their Edwardian clothes.  A super all round team effort
there were  plenty of different balloons in all shapes and sizes for the children to choose from.
Entertainment was provided in Angel square, and along with Scottish pipers, fairies and elves etc. a fireworks extravaganza ended the celebrations in the castle grounds to round off the evening of Christmas delight.

Click here for more of "Santa Claus comes to town"

It was well attended and good to see so many youngsters taking part this year. 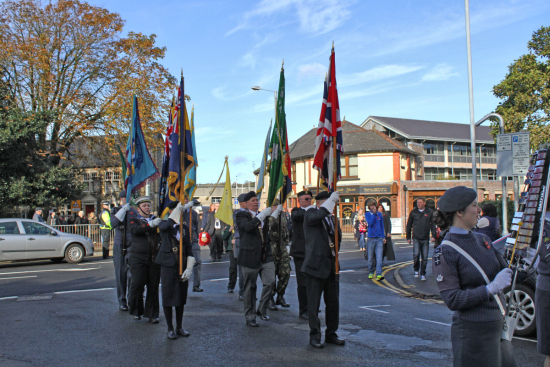 Also paying their respects to those who sacrificed their lives for their country
were:-
Neath town Mayor Mark Fisher
Rt. Hon Peter Hain MP
Cllr. Leader Ali Thomas
Gwenda Thomas AM
And other council dignitaries
The service was conducted by
Canon Stephen Ryan, Rector of Neath. 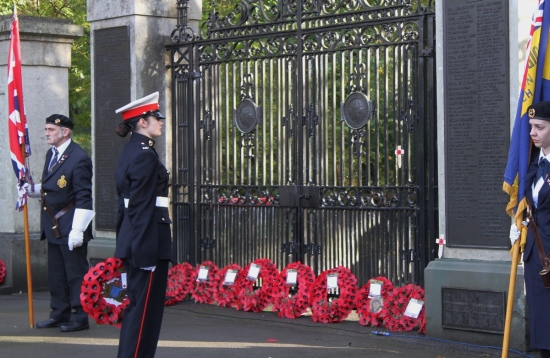 The generation who fought in World War One are no longer with us, but their passing means we must not stop remembering the sacrifice they made, we will continue to honour them on this and every Remembrance Sunday.

While that generation has passed, sadly war and conflict are still with us and so this event still has relevance in the 21st Century.
Service men and women from across Wales and the UK are currently on active duty in Afghanistan.
In recent decades armed forces personnel have lost their lives in places like Bosnia, Northern Ireland and Iraq.
By taking a small amount of time out of our day we can pay our respects and make sure their sacrifice is not forgotten.

They shall grow not old, as we that are left grow old:
Age shall not weary them, nor the years condemn.
At the going down of the sun and in the morning,
We will remember them
Lest we forget