When the government army formed up on the moor near Culloden House on the morning of 16 April 1746, the faced the army of the clans, the descendants of the Caledonians. It was a family army: fathers stood next to sons, brothers were there with their cousins and uncles, and in the moments before battle was joined the did something characteristic of a Celtic host. They summoned the army of the dead. In what is known as Sloinneadh, the naming of the names, each man recited his genealogy, and man could go back twenty generations, Before they charged across the heather into the gunfire, the clansmen wanted to recall their ancesters and fight in their shadows. In a modern culture where many can scarcely recall the names of all four of their grandparents, a sense of the importance - and the power - of ancestors has been all but lost.

Put coldly, sloinneadh m (genitive sloinnidh, plural sloinnidhean) means  designation, surname, patronymic. But here it conjures up much more. At the very outset of a comprehensive handwritten family tree that I have inherited is A Skirving died at Culloden. I have not yet found who he was or how he fits into my geneaology, but his name has filtered down through subsequent generations of Watsons. It has coloured my family stories. It has given them a very Scottish slant. But of course this is only a small part of my ancestry. My stories need to be balanced.

I am Jeremy Hugh Watson; born in Johannesburg, South Africa, in April 1951, and now living in Scotland. It is necessary to tell you this as, whether you are related to me or not, you need a reference point from which to consider what follows.

I have recorded as much family genealogy on genealogy websites as I can. But while essential to work out the great plan of things, those spidery organogram charts have limitations. What is hearsay or simply family legend? There are many loose ends. Unless absolutely susbtantiated, these cannot be included in a formal family tree, yet they may still be important as kernels for future research.

And then there are the stories and details including photographs and memorabilia that require much more than simply a corner of a family tree chart.

If left in shoe boxes on top of the cupboard they can be lost or left out of context for future generations. My collections are in a picnic basket and large boxes. Some important inherited photos of mine have discoloured, faded, even stuck to each other from damp air. Imagine them in another 30 years.

Even if some family legends prove to not have the grounding anticipated (at least one doesn't), they can be very interesting and airing them here can at least show where the wrong tree may be barked up. Or perhaps provide be the kicking-off point for further enquiry. Every so often I have inserted "[TBC]" to note where confirmation is required.

The cover photograph above is a case in point. I have not been sure who they all are, but I expected that most are relatives or close family friends of the time. It was taken in 1900. Aparently all Watsons. On the other side are clues, but whoever marked that up, presumably my father, also seems to be unsure. The more I study this the clearer it becomes. One face stands out. That gentleman with the white beard. That is "James W W" ie my great grandfather James Watson Watson, he who went to sea. Di is James Watson's wife, Di Richards, my great grandmother, who he married in 1869. Dinah is Dinah Kedslie Watson born in 1870. Scott is presumably Talbot Scott Watson born 1871. Colin is Colin Peeke Watson born 1875. There seems som confusion about Harry who is apparently Harry Arnaud Watson born 1877. Alek is presumably Alexander Richards Watson, my grandfather born 1873. William will be William Roskelm Parsons who married Dinah. Alice will be Alice Jardine who married Talbot Scott. 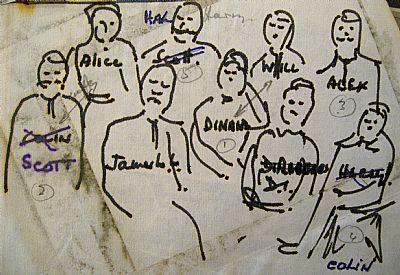 Below is one from the early 1950s. Taken in East London and within my living memory. 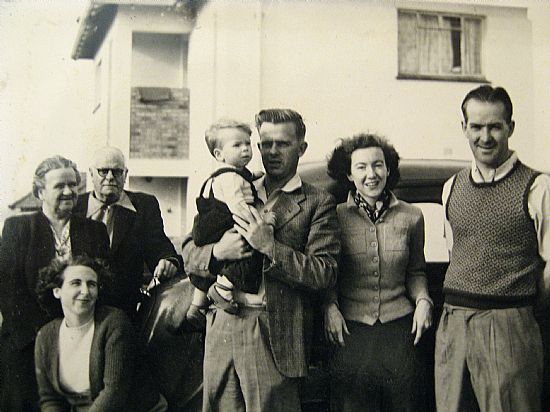 Nana and Da, ie Annie and Cuthbert Wells, my maternal grandparents stand behind Pamela Watson, my mother, their daughter. Hugh Wells, their son and my uncle, holds me. Next to him is Margaret Wells, Hugh's wife, my aunt. And next to them is my father Brian Watson. This picture was taken at 10 Tait Road, Baysville, East London, South Africa. We later moved into number 12, the double story seen in the background, and my grandparents moved into number 10. I was born in 1951, but am unsure of my exact age in the picture. Not yet two as my brother had not yet been born.

What better than to find some genealogical records from way back and written by an ancestor. The following two sheets are copies from the hand of James Watson Watson, my great grandfather, written in Plymouth 29 Oct 1890. 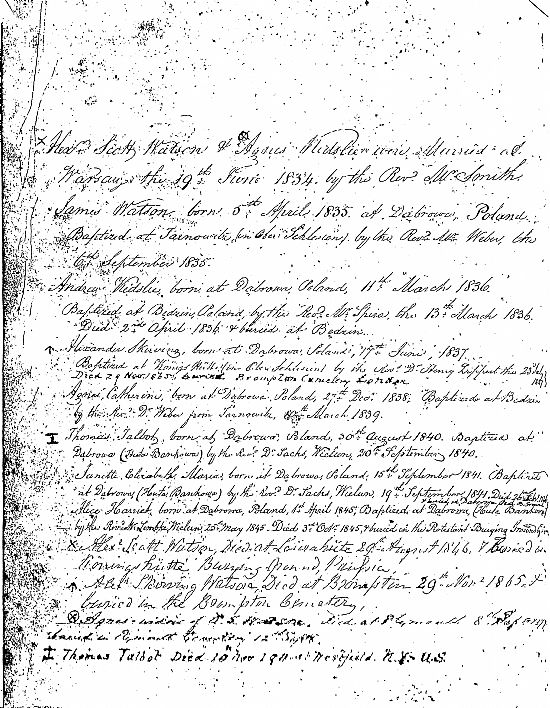 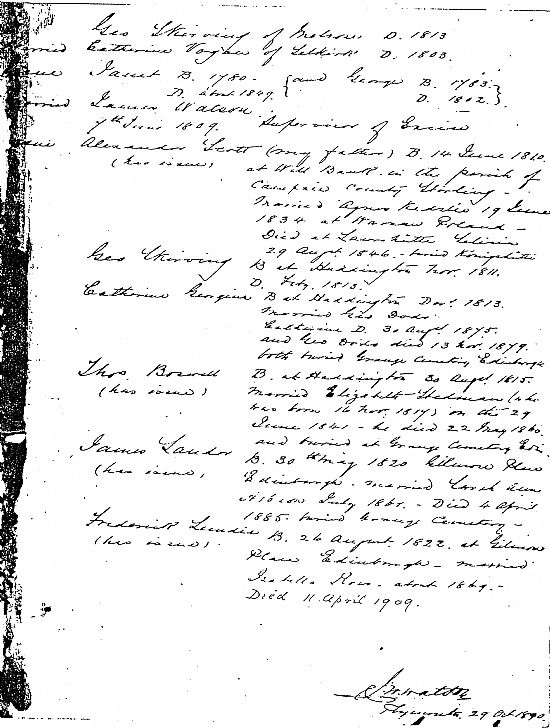 This is written from my own perspective. I was born of a Watson father and Wells mother. Each of them leads me to maternal heritage of Miller and Crawford. And those in turn lead to other branches.

As we progress we will see less direct family links too. Some geneologically connected. Some by aquaintance.

As the author of this website, I have the benefit of being in the epicentre of this view and the views expressed here. But many of you will relate to this or be directly or indirectly related. I would like you to identify with it and comment or contribute.

While I have tried to make it readable and have added my personal comments, this is not intended to be a blog nor articles. I have instead packed in as much information as possible and tried to keep that to my sources. The idea is that this protects for perpetuity much what currently lingers in my house so that others in the future can make their own interpretations and follow their own research.

Names that you will find here cover mainly, but not only, the following surnames. Use the FIND facility at the top right corner instead of an index.

And these are spread out mainly across the following places:

You will see much more about my paternal lineage than my maternal and this goes for branches at each level too. This is not intentional. It is just that so much of what has been passed down to me takes this approach, it is almost "traditional" and it is so much easier to track the inherited surnames. And almost invariably it is the male careers that are recorded in more detail. But wherever possible I have tried to balance that. I am quite sure that there must be great stories within the maternal branches too.

Other family through my marriage

My wife originates from Hoods and Taylors, each with their own roots, but I will leave that to her to follow through.

In order to minimise intruding in the privacy of family members, this website intentionally stops short of my current generation or their families. The only current person to feature is me (as a youngster).

The links tab will provide you with more general background information. Information more specific to each subject is included within that text.

The column of titles to the left is in alphabetical order (not chronological). For easier searching use the FIND facility to the top right.

In order to clarify what is quoted and where quoted sources change, I have used coloured text in most cases rather than quotation marks. My own comments are always in black.

Enjoy and please comment or contribute if you consider it relevant.