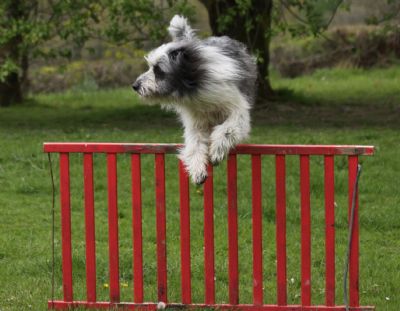 For nearly ten years I had searched for the ideal working-bred dog to join my girls.......and I had started to despair of finding one who would answer all my requirements. I wanted a dog of similar type to my own line but -as far as possible - unrelated to them. He must be of outstanding temperament; intelligent, highly responsive but not over-sensitive, good natured and affectionate but self-assured and steady too; eager to learn and an enthusiastic worker but not over excitable or noisy; he must be well-constructed, fast,athletic and not too big or heavy; he must have a correct coat and as little of it as possible..........and he must be bred entirely from working stock with no trace of KC blood ...... A tall order - but I found him.....and brought him home on 15.8.2009. A red-letter day as Glen was the first Beardie I had brought in since establishing the Brambledales in the early 1960s.He is :

Glen's pedigree (and those of his progeny) can be seen on Irena Fransson's 'Bearded Collie Pedigree' website, www.bcpedigree.se  under his 'official' name, Briery Glen of Brambledale.

Bred in Scotland by shepherd Peter Robertson and his partner, Sarah Smith, who inherited the long-established Briery Working Beardies from her grandfather, Ted Toolan of Briery Close, Cumbria. 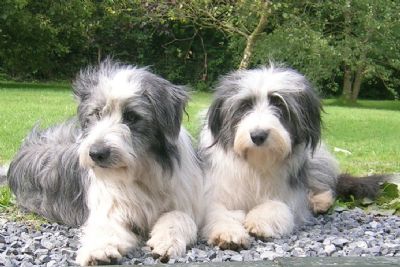 Above : 20.8.2009 :Just arrived at Maes yr Haul, Glen (on left) has already teamed up with Blodyn ( at 18months, Blod is twice his age but the similarity of type is striking.)

Below are some new pictures to celebrate our gorgeous boy's first birthday.

(Photos by Christine Erdmann for www.beardienews.de)

Above: Peter Robertson with Glen's mother,Briery Nan, at work in the hills.

Above: Briery Maggie, mother of Nan and grandmother of Glen.

Glen's parents as youngsters : Bill (on left) and Nan. And (below) Glen Douglas, home of the Briery Beardies .