.'          The new millennium brought a change of direction for the Brambledales. I decided that I could no longer continue to breed sound, sensible, healthy Beardies within the KC closed-register system and that the only way forward was to incorporate the best Working Beardie blood into my line. 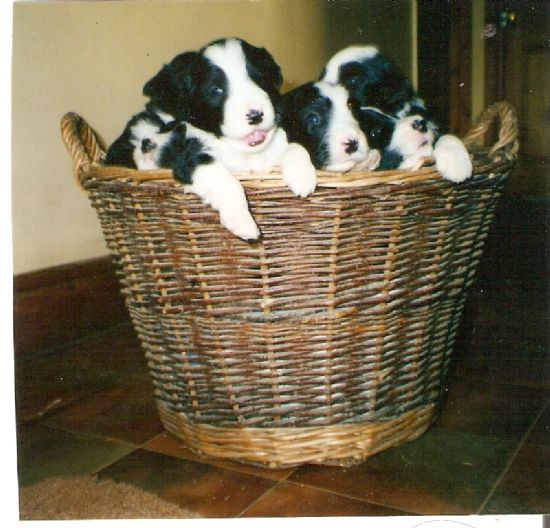 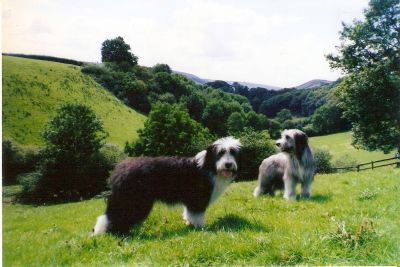 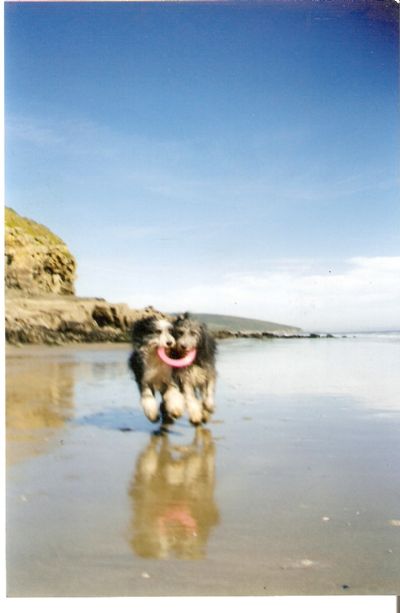 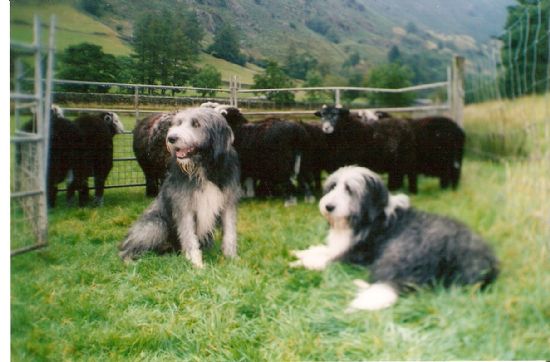 Nan + Nancy working together at Langdale.

Nan is one of those larger-than-life personalities that have appeared from time to time throughout the Brambledale history. She reminds me very much of her great-great-great-great-grandfather, Brambledale Boz ( 'David' ..see 'The Seventies'). Like him, she radiates good humour and enthusiasm, never worries about anything........and is something of a clown. She adores children ( she will cross the road to kiss a baby ) but found puppy-rearing tedious as it got in the way of her other activities. So having given us two wonderful litters, (both by Elan Jim) she has earned her 'early retirement' and is busy enjoying everything she can pack into it. Physically, she is a heavier build than I like, with the result that her enthusiasm for agility outstrips her ability to tackle our more taxing obstacles  - such as the six-foot scale  -   but she is a very reliable worker who puts her heart into everything she does and gained the BCC Senior Working Test Medal at two years old.                              The desire to produce a more athletic physique was one of the reasons for my choice of the light-weight, agile Elan Jim as mate for Nan and it certainly worked, as can be seen on our 'Action' page!

The rest of this page is devoted to Nan's children and grand children......... 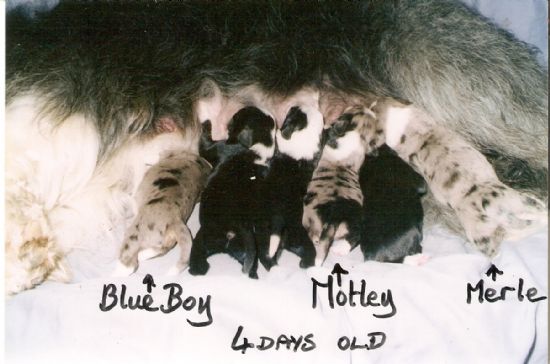 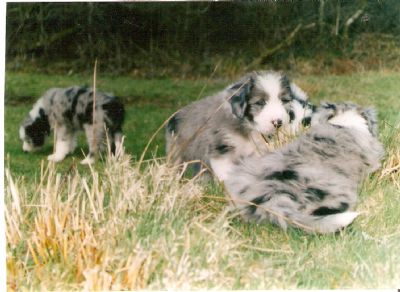 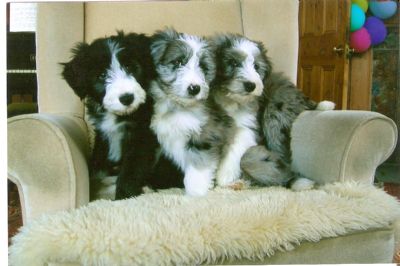 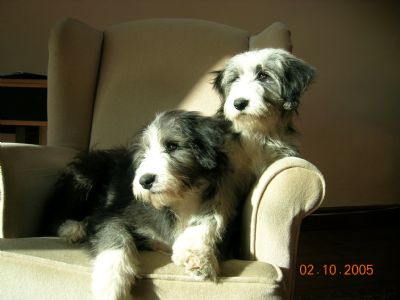 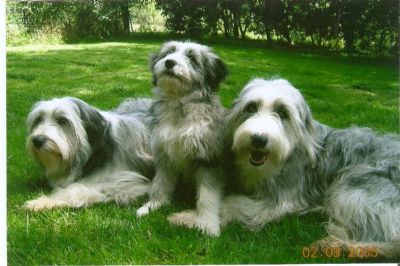 B.Blue Motley (Mottie)                          Mottie is the joker in the pack, not only because of her gently humorous attitude to life but also because she is the only member of the family who does not take 'work' seriously. None the less, she humours me by doing every thing I ask of her, albeit with a wry smile on her face!

B.Blue Merle .                  Merle is the perfect working dog, combining great enthusiasm with steadiness and an ability to  listen carefully to instructions and to concentrate on her work whatever the situation. And although she will carry on tirelessly for as long as required, she will  also 'switch off' without fuss as soon as asked. 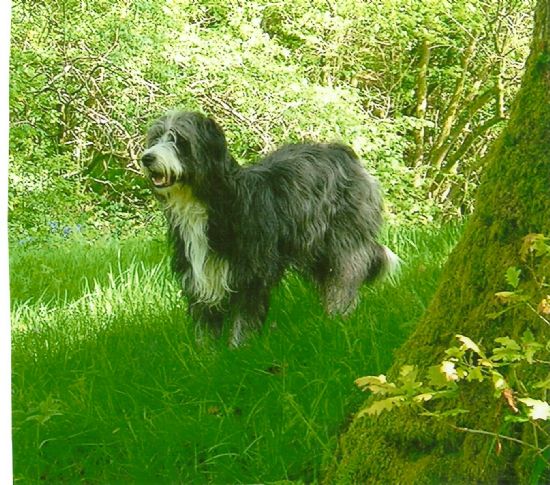 B.Breeze .            Like Merle, Breeze is a steady and relaxed character and a charming companion. Tall and very athletic, she loves agility and is a reliable worker, though always happy to wait her turn. She has proved an outstanding mother, devoting herself completely to her babies.....and still supervises  -  and plays with  -   her resident daughters Blodyn and Breezanna. 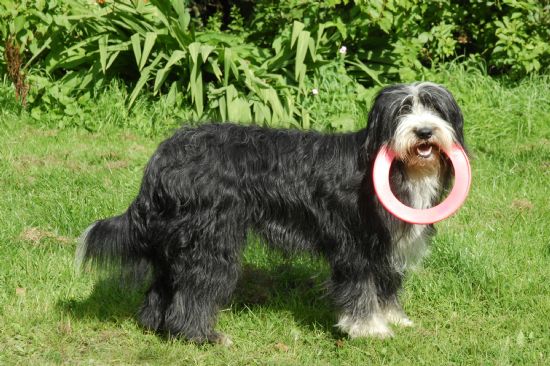 Nell is an extraordinary character and  probably the most intelligent Beardie I have ever known. She gained the BCC Senior Working Test Medal at just 15 months old (together with Merle), but her special talent is for problem-solving and creative thinking. She first demonstrated this as a very small puppy when her attempts to carry a length of rope down a steep slope at Maes yr Haul were hampered by the rope getting under her feet. Nell put the rope down on the grass, folded it up,  picked it up again and trotted off happily with the ends well clear of the ground.  This was just a taste of things to come......Nell solves problems without the trial-and-error method that other dogs use.....she just sees what needs to be done - and does it. Fortunately she is also extremely eager to be helpful (she could be a menace if she were not! ) and devotes herself to looking after me, reminding me of tasks I have forgotten, picking up my dropped gloves, finding my lost spectacles and running upstairs to fetch my slippers....all without waiting to be asked.She also invents new games to occupy the other Beardies when I am busy (see 'Nell's Game' for just one example ).      I would not have expected such a lively personality to have a strongly maternal instinct, but when Nell's mother, Nan, whelped her second litter, Nell was enchanted by the puppies and took them into her charge, even though she had been a baby herself only a year earlier. Much to  Nan's delight, Nell took such good care of her little siblings that   all their mother had to do was to feed them. 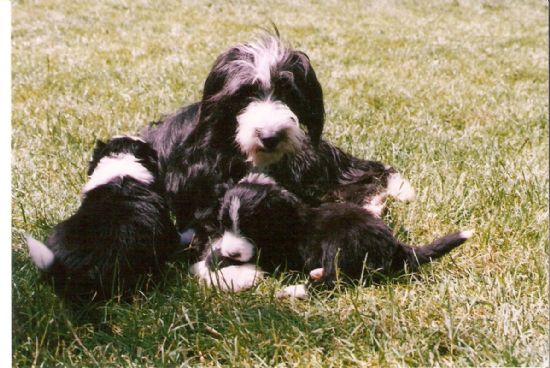 Nell with her baby siblings, Breeze and Enya. 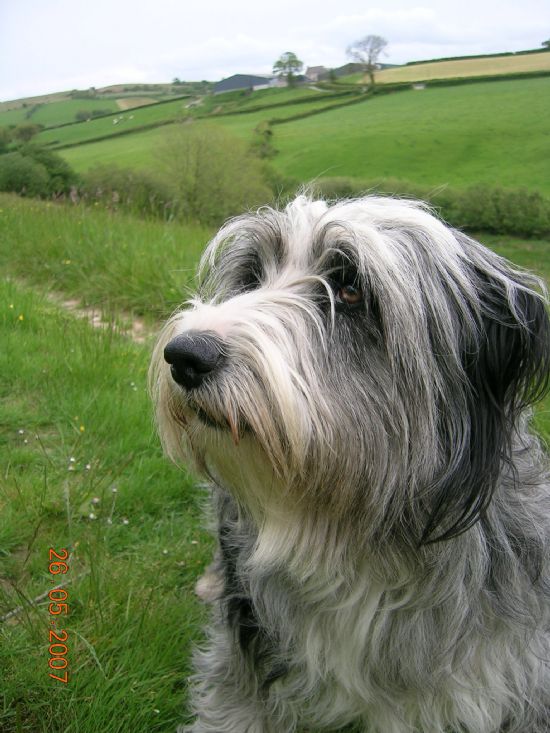 The third of our resident blue merles, Tiger is a darker blue than Merle and Mottie. She is very affectionate, outgoing and friendly but also a very attentive worker who adapts her manner according to the situation. Although she is the smallest of our current family and lacks the athletic build of her sister Breeze, she is a brilliant and enthusiastic jumper  and fearlessly tackles any obstacle, as can be seen on our 'Action' page.

Tiger is an unassuming little soul, never demanding attention and always waiting politely for her turn. In our large Beardie family, however, this endearing characteristic resulted in her sometimes being overlooked altogether and by this summer - when my Beardie numbers reached thirteen - poor Tiger was obviously feeling the strain.
My good friend Cas Sloan came to the rescue, and took Tiger home to Surrey to see whether she would be happier in a household with fewer dogs ( two lurchers, Daisy and Jaikie ) and more attention-giving humans ( Cas, husband Andrew and mother Jo).
It was agreed that Tiger would come straight home again if she wanted to and that, in any case, no decisions would be made unless everyone was happy........
Here is part of Cas's Christmas letter:
".....We love Tiger. She has quietly become the heart of the family. My mother says she is the perfect dog. She is funny, friendly, loving, obedient, gentle, intelligent, she loves to please, without being subservient. She enjoys everything, from the moment she wakes up, to when she goes to bed..........

Mum lost her glasses one day. She had to go out, so I looked, and looked. In places like the fridge and the washing machine, as I grew desperate. Nothing. Finally I sat down on a chair and said to Tiger 'I can't find the glasses anywhere, Tiger.'

Tiger looked at me, went to the sofa, stuck her nose, then a paw underneath and pushed the glasses out. I think that was remarkable.........

She enjoyed her holiday. [In the Lake District.]  We went to the Beardie meet. Tiger got out of the car, looked for you, then hopped back in again! She came out later and we met

Zac with Martin.  Balmy Breeze with Barry, she was lovely, bright as a button, and Buzz  who belonged to the vicar's wife. They were all cheerful, affectionate dogs. [And all Brambledales.]

We had Tiger off lead all the time. If she saw a sheep on the fell, she planted her feet to tell us it was there, then walked on. She is a real pleasure to walk. I never worry about what she might do.

Tiger loves her fruit. My Mum was eating a juicy peach shortly after Tiger arrived. Tiger went and sat next to her and sniffed. The conversation went as follows:
Tiger: That smells nice. What is it?
Ma: It's a peach. (Goes on eating)
Tiger: It's what Beardies live on in the wild...
Ma: (Spot the mother) Try some, but you won't like it.
Gulp.
Tiger: YUM!
She likes nectarines as well, but not apple or pear.
She also said that beardies live on ginger biscuits in the wild. We did not believe her.
She does love food. If someone is cooking, then Tiger is in the kitchen watching. Every now and then she raises her nose for a sniff.
I found myself reading the recipe to her the other day.
Music. She had to get used to it quickly. The first rehearsal she heard was outside the room  for the first few minutes, then she came in and lay down. Her concert manners are impeccable. She does not bark between movements, but waits to the end of a piece before she gets up to say hello. On Sunday we made another discovery. We were playing Mozart and Meryl said that I must have been enjoying myself because I was humming. I denied the humming. We started again. Meryl suddenly leaned forward, still playing, to listen. Tiger hums!!! It's not a growl, she is not distressed, just joins in from time to time. She is also very useful. If anyone has cold fingers, then they burrow in Tiger's coat and rub her. Result, happy dog and warm fingers!
Tiger loves her squeaky toys. Rubber ones stay unmolested. Furry ones are unpicked  by an inch, then the stuffing is removed until the squeak comes to light. Some nights we look like a taxidermists. Mother and self sewing up squirrels, rabbits and others.
Tiger likes to take a toy to bed. She always takes a rubber squeaker, but one night Mum had bought her a furry porcupine and she wanted that too. It was too much for one mouth, so she picked up the porcupine and gave it to me. When she realized I understood and that I was carrying it, she also fetched a squirrel, pushed it into my hand, then made her way to the door glancing over her shoulder to make sure I was following.
I forgot the swallows. I will remember this when I am old. We get swallows on the downs. They were late this year, right into October. One afternoon we were on the back fields and the swallows were swooping really low to the grass. Tiger saw them and ran towards them, then ran with them. She wasn't chasing them, more dancing among them. Very beautiful!
. Please give  hugs to the family.
Tiger sends her love, so do I,
Casxx "
***************************************************
Problem solved, I think! If only every Beardie could have a friend like Cas!
*******************************************************************************************************

Blodyn  is an interesting mixture of the calm, steady, almost languid  character that  is captured in the picture above.......and the intense, highly intelligent and tirelessly enthusiastic worker that she becomes whenever the need arises. A talented youngster with a promising future and a very gentle and affectionate companion. 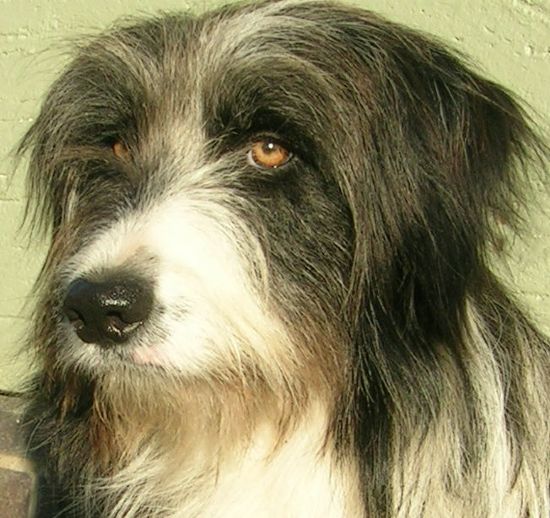 Hanner reminds me very much of her Aunt Nell, being outstandingly intelligent with a particular talent for problem-solving and creative thinking. Since early puppyhood she has had a passion for finding out how things work. When she was nine weeks old she was intrigued by the squeak in a  soft toy given to her by a friend .....but instead of ripping open the toy and flinging the stuffing around, as other puppies might have done, Hanner found the seam in the back of its head and carefully unpicked an inch  -  just enough to extract the squeaker. A remarkable feat of 'keyhole surgery'.....and not a scrap of stuffing lost!    Hanner also shares Nell's ability to solve problems by observation without the need for trial-and-error  (although they do use this too when necessary).  She was still a baby when she learned, purely by observation, that the electric wheelchair of a paralysed friend we were visiting works by the pressing of buttons in the foot-rest......and had a go herself! (more of this elsewhere).And, again like Nell, Hanner is a devoted companion......and well aware of her own specialness! 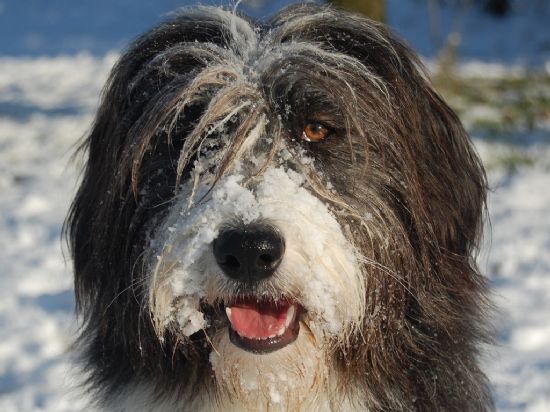 The third of Breeze's daughters and sister to Blodyn and Breezanna, is B.Bubbles,  owned and photographed by Carolin Kupper in Germany.  Carolin describes her as "Our sunshine".