I wrote this article in 2005 in response to the extraordinary claim of the committee of the Bearded Collie Club that "Working Beardies have many undesirable traits such as....... incorrect coats and temperaments...."

"True Beardie Type"first appeared in the German magazine Beardie Revue  in December of that year. I have added some new illustrations to this website version.

There are more articles on this subject on the sub-page. 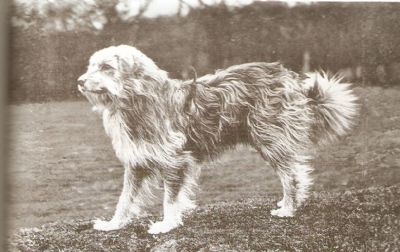 Right: Ben, a lovely type of Working Beardie of the early 1900s

The story of how Mrs Willison became involved in Beardies is well known. In 1944 she ordered a Sheltie from a dealer in Scotland, but when the puppy arrived she thought it was some kind of cross-bred sheepdog and only later learned that it was a Beardie.In the meantime Mrs Willison and her family had been completely captivated by the character of the dog who was later to be registered as Jeannie of Bothkennar. As Mrs Willison wrote, "Jeannie was not only more lovable than any dog I had ever known, but she had an uncanny intelligence...." It was this intelligence, character and power of understanding that made Mrs Willison feel that she could not bear to be without such a dog in the future and which set her on her quest to find a mate for Jeannie in the hope of producing a worthy successor to help fill the huge gap that would be left when she died.

Below : Jeannie of Bothkennar Born 1944 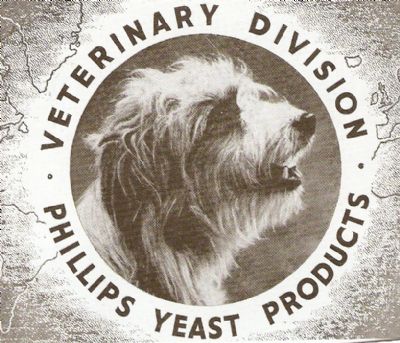 Mrs Willison certainly succeeded in her aim of reproducing Jeannie's remarkable character in her progeny. When, as a child growing up just a few miles from her home, I met some of the early Bothkennar Beardies, it was this same character and almost uncanny understanding that captivated me and started a love affair that has already lasted for almost fifty years. 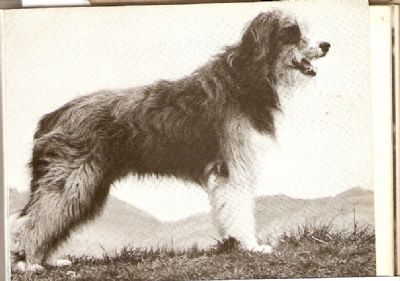 Britt of Bothkennar Born 1955 In 1964, when Mrs Willison disbanded her kennel, Biscuit of Bothkennar was expecting a litter by Mrs Willison's favourite stud dog and companion, Britt of Bothkennar, bred from working parents on a farm in Scotland. Feeling unable to cope with the whelping and puppy-rearing herself, Mrs Willison asked me to take Biscuit into my home to whelp and rear her litter, which of course I did. I believe that this was the last Bothkennar litter and I was delighted to be able to keep for myself a bitch puppy, Brambledale Briquette of Bothkennar, as a future wife for my first Beardie - a son of Ch. Benjie of Bothkennar - who was already making a name for himself as a winner, both in obedience competitions and and in the show ring. All of my present-day Brambledales are descended from this pair and my aim has always been to preserve the remarkable character that for me - as for Mrs Willison - made the Beardie so very special.

As it turned out, of course, Mrs Willison's involvement with Beardies did very much more than just provide her with future companions. By showing and publicising her dogs she had focused a spotlight on a breed that might otherwise have remained outside the world of dog shows and kennel clubs, known only to those shepherds and farmers who treasured itas a worker. 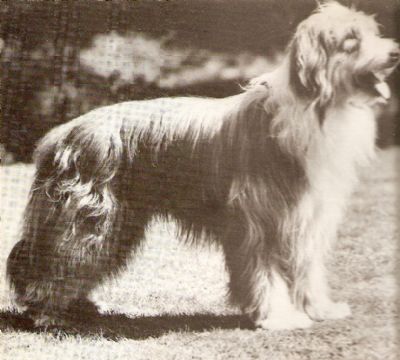 But even in the 1960s Mrs Willison recognized that the breed 's growing popularity was attracting a new kind of enthusiast, more interested in the glamour of the show ring than in the unique character of the Working Beardie. In 1968 she wrote in the Bearded Collie Club magazine:

" But in spite of their success in the show ring, let no one forget that the Beardie is a WORKING breed and as such, temperament and intelligence are of utmost importance. It would be a great mistake to try to "improve" the breed by aiming to breed bigger dogs with heavier coats. Let us keep the Bearded Collie as it is - an intelligent, lovable companion, capable, if required, of working sheep and cattle."

Readers must judge for themselves whether Mrs Willison's warning was heeded. Perhaps it is just as well that she did not live to see the results of almost forty years of further "improvement" that have produced the show Beardie of today. One of her contemporaries, however, much involved in the "revival" of the Beardie in the 1950s, did live to see the twenty-first-century show version of the breed he loved. This was Clifford Owen, who owned such important foundation sires as Newtown Blackie and Workway Drover, and who died in 2005. This is what he wrote in the early 1990s:

".......there are, as in so many breeds, two different beardies, one for show and one for work. The working characteristics will remain in the show stock for many generations and could be bred for, but the coat is now so exaggerated that it would be difficult to persuade a shepherd to accept one as a gift. It would be easier to take, as I did, from the specimens still working and start again, crossing with the show strain and selecting for sensible coat if that was necessary."

"The best illustration of a beardie that I know is the frontispiece in Owd Bob, by Alfred Ollivant."

Mr Owen knew Katherine Barker, whose "Owd Bob" drawings so beautifully capture the character of the Working Beardie. As a sheepdog trainer herself, she took a great interest in the breed. Miss Barker's drawings were made in the 1930s, but Working Beardies of the same type can still be found on upland farms today. Having always been bred for work, the type has remained largely unchanged, whereas today's show Beardies bear little resemblance to Jeannie, from whom they are all descended.

When the Bearded Collie Club was formed in 1955, Mrs Willison and Mr Owen were the key figures involved, being the only breeders registering Beardie puppies with the Kennel Club at that time. It is ironic that in 2005, while celebrating the club's 50th anniversary, its current committee should have launched a fierce attack on the Working beardie  - the very dog that the club's founders had wanted to preserve. According to the current committee, however, the Working Beardie is inferior in almost every way to his show-ring cousin, being of poor type, poor health and poor temperament! Particularly interesting, given Owen and Willison's grave concern about show coats, is the committee's claim that Working Beardies have "incorrect coats".Since I assume that "incorrect" means "not conforming to the KC Standard", let's look at what the standard says.

The first point to note is that the emphasis throughout the standard is on the importance of not having too much coat . Nowhere does it ask for a long coat and much of the description of the character and appearance of the dog makes plain that it depends upon the coat not being too heavy.

For example, the Beardie "should show plenty of daylight under the body and should not look too heavy." A "bright enquiring expression is a distinctive feature" which - as Mrs Willison noted in her book on the breed - ".....is impossible if the face is hidden in a mass of long hair like an Old English Sheepdog." 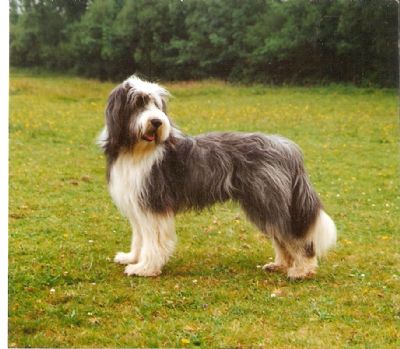 The section on the coat itself requires:  "Length and density of hair sufficient to provide a protective coat and to enhance shape of dog, but not enough to obscure natural lines of body."

And on the head :

"Bridge of nose sparsely covered with hair, slightly longer on side just to cover the lips. From cheeks, lower lips and under chin, coat increases in length towards chest, forming typical beard."

And that all-important expression, of course, depends upon the

"eyebrows arched up and forward but not so long as to obscure the eyes."

............which makes clear that any Beardie with enough hair to be tied up in a top-knot is incorrect!

It is important to note that the Standard places at least as much importance on the Beardie's character as on his looks. It describes a dog whose character is to be seen in his face and in his whole demeanour. He is "alert, lively, self-confident and active." And his temperament is that of a "steady, intelligent working dog, with no signs of nervousness or aggression."

How extraordinary that the BCC committee should insist that the temperament of the Working Beardie is an "undesirable trait" !

The illustrations that I have chosen all show Beardies of the type required by the Standard. Look into their faces and you will also see the wise, intelligent, steady, self-confident gaze of the true Beardie character  -  as described in the Standard.