The Hain Diaries - In praise of "close friends"

If you do read my articles you may recall the one dated 15 February 2016 that mentioned Madeleine Jennings who worked as a Parliamentary Researcher for Peter Hain and then Kinnock the Younger.

I wrote at the time that the name was familiar to me. Now I'll explain why. 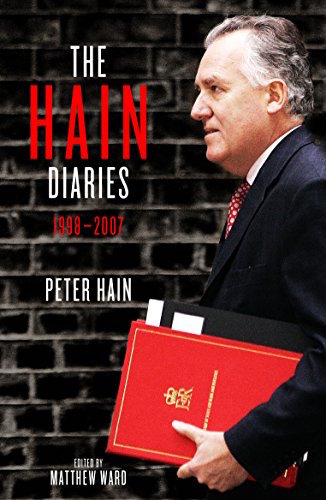 You can buy it on Kindle via Amazon right now for £7.39. Take a tip from me. It's just padded out parts of Hain's book about himself called "Outside In". If you really want to put yourself through it, buy this instead for £0.01 via Amazon, but don't come complaining to me afterwards! I'd rather wear a hair shirt for a year and have my back whipped until it bleeds on my birthday, Christmas and Easter than read it again. And I am not joking!

A Madeleine Jennings is mentioned by Peter Hain in the "Acknowledgements" for the Hain Diaries. He describes that Madeleine as "a close friend" who "added invaluable final edits and corrections" to the publication. It's too much of a coincidence for there to be two Madeleine Jennings' known by Hain, one a Parliamentary Researcher and his employee, the other his "close friend". They must surely be the same person.

Cari Morgans was also thanked for her help with the same publication in transcribing the many hours of audio recordings of Hain's memoirs. Cari was the Neath Constituency Office Manager for Hain and was in that post when the Diaries were published. She was, and still is, a Labour Party councillor on Neath Port Talbot Council. She is now Constituency Office Manager for Stephen Kinnock.

Also mentioned is a man called Phil Wyatt. He, like Ms Jennings, is described as "a close friend" and also carried out the same work on the publication as she did. And if you follow this story to the end you will see that Phil Wyatt was also employed by Hain at the time the Diaries came out.

As the old saying goes, things always come in threes. But it doesn't end there because in this case - they come in fours! That's because the Editor of this publication is another gentleman called Matthew (Matt) Ward. And you know where this is going. Yes, Matt Ward was employed by Hain. Then just look where he went - just like Cari Morgans he worked for a neighbouring Wales MP, but this time it was Madeleine Moon of Bridgend and not Boyo Kinnock. He left her employment in September 2016 according to his Linkedin pages.

If you check on the Register of Members' Secretaries and Research Assistants in 2014 (link below), you will find Madeleine, Phil and Matt all listed as employees of Peter Hain less than one year before the Hain Diaries were published (you'll have to scroll way down, sorry). Cari Morgans would not appear here - she was Neath based, not Westminster, so would not be listed in this Register.

So, we have Cari Morgans in Neath, and we have Madeleine Jennings, Phil Wyatt and Matt Ward in Westminster. All credited by Hain with helping him with this book. And all employed by him at various times, and certainly all still on his books (the Parliamentary ones that is - heh, heh!) as the publication of the Diaries was approaching. And all paid out of the public purse i.e. out of your money and mine - because where else does MPs' staffing allowances come from?

But it doesn't even end there. No way it doesn't. Because other people listed in the Acknowledgements of those Hain Diaries include Sally Hain, his sister who worked for him in earlier years, his son Sam Hain who also did some work for his Dad - courtesy of the MPs' Allowances (more to come in a future post), Sue Gray of the cabinet office who is unique in not having been employed by him, and finally, Howard Davies, his "Talisman", who was his agent in earlier years and now described as his "best friend". FFS - could there be more cronyism and nepotism in the Neath Labour MP's offices if you had a deliberate policy to promote it?

Does this really matter? What point am I trying to make? Well, I find the blurred lines we see so clearly here, of employer/employee relationships and personal friendships, uncomfortable and unacceptable - because the money paid to employ these people is public money, and their recruitment takes place by the MP him/herself. If it was a private business you can employ whatever mates you like - I've got no valid criticism because it's your money (or shareholders, perhaps - but at least you'd be accountable to them).

Plus, I know that Peter Hain has muddied the waters of his role as an MP and his private literary interests in the past. How? Well his old MP Website listed the books that he had written, with references to their ISBN numbers too, presumably so it would help you to source them. It also occasionally included reviews of his more recent books. This was a website 100% funded by public money - yours and mine - under Parliamentary guidelines that specifically forbade the use of the website for personal gain. Well can someone please explain to me how publishing a booklist as well as favourable book reviews on it could be anything but using it to further your book sales?

Look, I like the idea that there are still a few employers about that we can describe as paternalistic so in one way it's nice that old Peter seems to have been a good stick to work for. It's easy being paternalistic, of course, when it's not your own bank account providing the funds. But, hand on heart - how do we know that ALL this assistance they provided Hain with his book took place outside of their normal work? Can Cari Morgans, for example, say that without a shadow of a doubt, none of the said transcribing of memoirs took place in her usual place of work, No. 39 Windsor Road, paid for by us the taxpayer? Can the three people in his Westminster office at the time honestly say that not a minute of their time when employed by Hain was spent on doing any of this work? Let's face it - we'll never know, will we? Like so much to do with the way public money is spent by our political masters, it's about as transparent as a blackout blind. And the people who are left in the dark, wondering if we've been tucked up, are us - ironically, the people who keep the food on the tables of this lot. WE are the MUGS who have no choice but to pay for it all in the first place.

There's an old saying about natural justice that not only should it be done but it should be SEEN to be done. I've always believed that similar rules should apply to anything involving how our public money is spent. When Peter Hain uses four employees to assist him with his book, even if all this work they do is entirely unpaid and voluntary, in their own time and in their roles as "close friends", the onus shouldn't be on us to establish the precise nature of such arrangements. Because of the possibility that such relationships could be misinterpreted, and these are all people paid out of the public purse, then preferably they should not work on such projects. But if they choose to do so, as "close friends", it should be made crystal clear that the contributions made by them were entirely separate from any work they were paid to perform for him as an MP. We should expect no less. Otherwise it's only right and proper that articles such as this put all these facts out in the public domain so that people are aware of these links, can ask their own questions - and ultimately draw their own conclusions.

This isn't the first time I've come across Peter Hain and these blurred lines. There will be more to come.