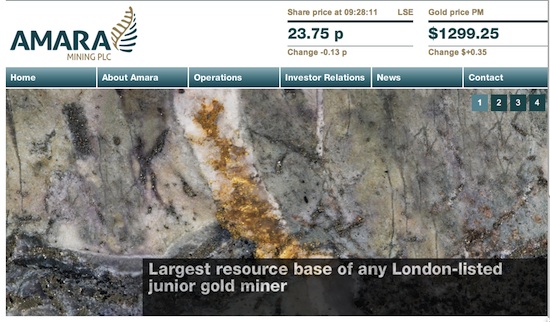 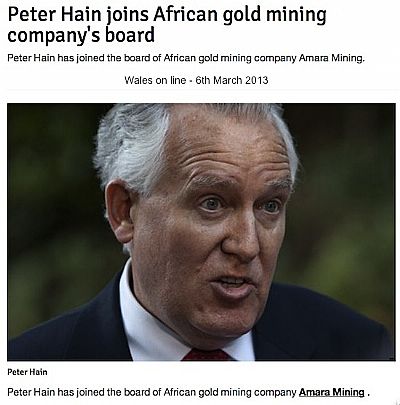 On 14-24 February 2013 Peter Hain travelled to West Africa, to the countries of Burkina Faso, Cote d’Ivoire and to Sierra Leone. The trip and the purpose of the visit is recorded in the Register of MPs Interests. He went to visit the gold mining sites of Amara Mining PLC, meet Government ministers and to open a school that the company had sponsored in Baomahun in Sierra Leone . The cost of flights and hotels is registered as £7,499.

The MPs Register also shows that on 6 March 2013, Peter Hain became a Non-Executive Director of the company, receiving "£31,500 with effect from 6 March 2013". It states that the annual time commitment for this work is about 12 days per year.

“We are delighted to welcome Peter to the Board of Amara to focus on the corporate social responsibility, community relations and environmental aspects of the business together with broader African political relations. He brings with him valuable experience in African politics, which complements the skillset of our other Board members. We now have extremely strong capabilities and expertise at Board level including geology, mining engineering, finance and the capital markets, as well as international relations. We view all of these areas as important to the success of our business and Peter’s appointment comes as part of the Board’s review of its structure, as we position ourselves to make the transition to becoming a mid-tier producer.”

"Mr Hain brings over 22 years of international experience to Amara, including a great depth of expertise and understanding of Africa and African politics through his role as Minister of State at the Foreign Office from 1999 to 2002. During his time at the Foreign Office, when he was responsible for African affairs, Mr Hain worked closely with the Sierra Leone government and was involved in a number of key initiatives and negotiations to bring stability to the country and facilitate a strong working relationship with the UK."

Amara Mining PLC is a gold mining and exploration company. The company is engaged in the acquisition, exploration, development and operation of gold mines and deposits in West Africa. The company’s holdings include Kalsaka/Sega, a producing open-pit gold mine in Burkina Faso; Yaoure, an exploration project in Cote d'Ivoire; and Baomahun, a prospect in Sierra Leone that it hoped to develop in the near future. The company owns three early-stage exploration licences in Liberia: Cestos, Kle Kle and Zwedru.

However there are indications currently that the company would consider selling the Baomahun project, which seems on the margins of being profitable at current gold prices, in order to further its interests in the potentially better prospects in Cote d'Ivoire. (Source: Sierra Leone News, 21 February 2014).

CESSATION OF MINING AT KALSAKA/SEGA GOLD MINE AND DIRECTORATE CHANGES

Amara Mining plc, the AIM-listed West African-focused gold mining company, announces that mining has ceased at its Kalsaka/Sega Gold Mine ("Kalsaka/Sega") in Burkina Faso and the Directors have decided to put the operation into liquidation.  This follows the receipt of a default notice to its local subsidiary in Burkina Faso, Seguénéga Mining SA ("SMSA"), from BCM International ("BCM"), the mining contractor at Kalsaka/Sega.

Amara was due to begin the closure of its two subsidiaries in Burkina Faso in Q4 2014, ahead of the scheduled cessation of production in Q1 2015, so while the default notice accelerates this event, it does not represent a material change to the Company's strategy for Kalsaka/Sega.

SMSA has taken the decision to commence liquidation in Burkina Faso to protect employees and all creditors, including Amara and its subsidiary Kalsaka Mining SA ("KMSA"), collectively SMSA's largest creditors.  Processing activities carried out by KMSA are continuing in the short term pending the appointment of a liquidator for SMSA.

John McGloin and the Board remain focused on the delivery of two Mineral Resource updates for Yaoure in H2 2014 and a PFS in Q1 2015 - the in-fill drilling campaign, engineering and metallurgical studies continues to progress on track

US$3 million bond is in place in Burkina Faso, which more than adequately provides for the rehabilitation of the Kalsaka/Sega site and facilitates the efficient closure of the operation - US$1 million of environmental rehabilitation work has already been completed

"By the start of Q4 2014 it was anticipated that Amara would commence the process to close its local subsidiaries in Burkina Faso, so while this event has been accelerated, the ultimate outcome remains largely the same.  The structure of the Company will be simplified and we will become an explorer/developer, with the true value within Amara remaining intact.

We made a commitment to our shareholders that funds raised would be applied to delivering value from Yaoure by improving the confidence of the resource estimate and project economics, and we remain committed to this objective.  The drilling programme at Yaoure is progressing to plan and we are focused on delivering two Mineral Resource updates in H2 2014 and a PFS in Q1 2015, which will further establish that the project has the potential to be one of the top 10 gold mines in Africa.  We remain fully funded to demonstrate this.  I'd like to thank Peter for his contribution to Amara and I wish him well with future endeavours."

The word Amara is of African origin and means "grace, eternal and immortal". The company logo is the Adinkra fern, meant to represent "endurance and resourcefulness".

In November 2013 the company sold about 21% of its shares to a wealth management firm RDV Corporation. The deal benefited Amara by bringing in cash, a drilling firm, and three exploration licenses in Liberia.

RDV invests on behalf of the wealthy DeVos family from North America, which owns 50 percent of Amway - a direct selling firm which sells consumer goods like skincare and cleaning supplies. They also own basketball team Orlando Magic and a portfolio of private businesses, and have invested in West African gold for over a decade.

Richard DeVos was listed as the 67th richest person in America by Forbes magazine in 2012 with a net worth estimated at $5.1 billion. He is a major donor to the Republican Party and to conservative causes in the USA.

Amara Mining PLC was previously known as Cluff Gold, a company formed by John Gordon (Algy) Cluff in 2003. In the early 1980's Cluff was the owner of the Spectator  for four years and its chairman for 25 years. Cluff is a former officer in the Grenadier Guards. He unsuccesfully stood for Parliament as a Conservative in 1966, and is a former director of the Centre for Policy Studies . He made a fortune with his company Cluff Oil in the 1970s, discovering the Buchan field in the North Sea, later selling the business to BP. Since then he has set up a series of other mining and resources companies. He was chairman of Cluff Gold until 2012, when he stepped down and the company was renamed Amara Mining. Algy Cluff has now started a new company, Cluff Natural Resources PLC, which has secured 100% working interest in five deep Underground Coal Gasification licences. One of the licence areas is the Loughor Estuary.