The Independent Parliamentary Standards Authority (IPSA) was created by Parliament in the wake of the MPs’ expenses scandal. IPSA was given the remit and powers to introduce independent regulation of MPs’ business costs and expenses and, subsequently, pay and pensions.

THE EVOLUTION OF MPs' SALARIES AND EXPENSES

Fifteen years later, in 1961, Harold MacMillan dismissed claims that MPs' allowances were not good enough by opening the floodgates for MPs…... He stated that MPs' professional and business interests outside of Parliament gave them experience of the wider world which could then mean they would be better represented at Westminster.

From 1993 onwards a Review Body on Senior Salaries (RSSS) handled MPs' allowances and they reached agreement in 1996 to set MPs' pay in relation to Senior Civil Service Pay boards. The result has been a sustained increase in the real value of MPs' pay since the mid 1970’s which accelerated sharply from the mid 1990’s.

1911 – MPs were allowed a limited amount of free stationery.

1924 – Limited Free Travel was introduced between constituency and London.

1945 – The free rail passes were extended to include London to constituency, constituency to home and home to London.

1954 – It was recommended that reasonably priced accommodation near the House should be provided together with limited free travel for the wives of MPs; free Postage and free trunk calls to constituencies; the provision of secretaries, free stationery and payment for one month after the dissolution of parliament.

These recommendations were not acted on.

From 1961 a car mileage allowance was put into practice plus free postage was extended.

Since 1969 all the 1954 recommendations have been implemented except instead of secretaries and reasonably priced accommodation being provided allowances were brought into being instead.

1972 – Members were allowed to use some of this allowance to employ research assistance.

1975 – The whole of this allowance could be used for secretarial or research assistance.

1976 – An allowance for Office equipment introduced.

The House voted for large increases in the allowances in 1986 and 1992.

2001 – This allowance was replaced by 2 separate allowances. Staffing Allowance which now catered for up to 3 staff and Incidental Expenses Provision.

In 2007 recommended increases in the staffing allowance to allow up to 3.5 staff to be employed. This was implemented in January 2008.

This allowance was introduced in 1971.

1985 – MP’s told they could claim mortgage interest payments against this allowance.

2001 – No recommendations re increases, however the House agreed to a backbench amendment proposing significant increases in the maximum rate for this allowance.

2009 – This allowance became the Personal Additional Accommodation Expenditure and the maximum amount which could be claimed rose to £24,222 pa.

This was a new allowance introduced in 2006 to assist in the work of communicating with the public on parliamentary business.

Some MPs claim very little in expenses. The MP for Neath is not in this category. We have seen furore after furore when expenses are made public but it appears there is no longer any shame when it comes to claiming public money and Peter Hain MP who uses expensive heating oil for his country residence at Aberdulais has been known to claim in excess of £6,000 in two years on heating oil alone. This amount of oil was used purely to heat his Aberdulais residence, which he only uses part time, due to his main residence being in London.

April 2008 to March 2009 saw Peter Hain MP claim the following allowances over and above his salary :-

Peter Hain MP became MP for Neath, a safe Labour seat in 1991. In 1988 the pay for MP’s was linked to the Senior Civil Service pay scale and during his career he has seen huge rises in the remuneration for MPs. The post has rewarded him well financially and he now bows out, to no doubt follow further lucrative paths, leaving behind him a town in distress. A town which most people who lived there when he won the safe Labour seat, fail to recognize as the same town.

Analysis of Peter Hain's claims under the heading of Additional Costs Allowance (now Accommodation Expenditure) shows that for the ten accounting years from 2004/05 - 2013/14 he claimed £165,778 under this heading or an average of about £16.6K per year. This allowance basically subsidises the costs of Mr Hain running his home at Aberdulais, which he declared as his "second home" with regard to the claiming of the said allowance. Amongst the items paid in full for Mr Hain over all these years have been his council tax, his electricity, his heating bills, his water charges, his house and contents insurance, his TV licence, the phone costs associated with his work as an MP, and at various times in the past, some of his cleaning costs, his internet, and the whole of his mortgage interest (until August 2012).

The expenditure claimed with regard to the costs of running his office at 39 Windsor Road over the same ten year period amounts to £186,047 or an average of about £18.6K per year.

None of the figures quoted above take into account the much greater figure that the staff employed to support Mr Hain's work as an MP cost the public purse (this is known as his payroll costs), nor does it include any travelling costs incurred by the MP, his wife or his staff, nor postage costs for sending out letters to his constituents (which are reclaimable under the expenses system). It also does not include any expenditure associated with an allowance now discontinued but known as the Communications Allowance, available to MPs in the latter part of the 2000's for three years, which allowed expenditure on advertising their services, leaflets, websites etc.

In 2012-2013 Peter Hain claimed expenses of £4571.74 towards heating oil and electricity for his house in Aberdulais. It is registered with the House of Commons as his second home for the purposes of his expenses claims.

According to IPSA records for the year 2012-2013, the cost to the taxpayer of keeping Mr Hain, his staff and running his office came to about £249K.

He has justified the claim in the following way:

He is now second in the claimants' list for expenses under those headings in that accounting year.

He was third but the previous highest claimant, Tory MP Nadhim Zahawi agreed to pay back a significant chunk of his claim for £5882 after it was discovered the bill included heating for his horse riding stables and a yard manager's mobile home.

And immediately below Peter Hain in the rankings was Conservative MP Alun Duncan who claimed £3998.06 or a full £573.68 less than Hain.

This is what some people of note said about the MPs' energy claims:

There are 650 MPs in Parliament and all except Inner London MPs are eligible to claim the allowance into which energy costs fall.

340 MPs chose to claim their energy costs back.

Peter Hain was THE SECOND HIGHEST CLAIMANT OF ALL THE MPs WHO CLAIMED.

HOW DO PETER HAIN'S EXPENSES COMPARE TO OTHER MPs REPRESENTING WELSH CONSTITUENCIES?

An analysis of the claims undertaken by the 40 MPs representing Welsh constituencies was carried out for the last year that IPSA has produced aggregated data, namely 2012/2013.

Besides their own salaries, which do not form part of this analysis, MPs cost the taxpayer for their various allowances and expenses, plus the costs of employing their support staff.

Peter Hain was the second most expensive MP in Wales on this basis, costing the taxpayer £183,181. The highest was another Labour MP, Chris Ruane, representing the Vale of Clwyd. He cost the taxpayer £190,318. The average cost amongst MPs in Welsh constituencies was of the order of £157K.

The analysis throws up some very interesting figures. The most expensive MPs were the LibDems, averaging £165K. Then Conservatives, at £159K, followed by Labour at £155K and the cheapest cost to the taxpayer being Plaid Cymru at £152K.

His other aggregated expenses, by deduction, must be more in line with other MPs.

So, if we take Accommodation costs ("second home allowance") Peter Hain's claim that year was £11,761 against a Wales average of £15K. 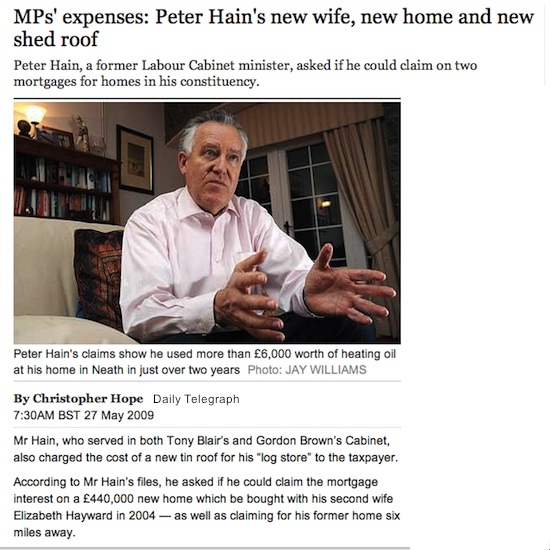