Peter Hain's constituency advice office is located at 39 Windsor Road, Neath. He rents the ground floor of the building from the Neath Constituency Labour Party who own the freehold. They let the upper floor out separately (see below).

In his book "Outside In" Hain sheds a bit more light on the history of his arrangements with the local Party with regard to his constituency office.

He was first elected as a Neath MP in a by-election in 1991 and he says his (first) office was quickly established by Howard Davies, his agent and case worker. He states "We had purchased and modernised a tiny derelict property with funds raised overwhelmingly from trade unions, buttressed by some of my own savings and a whip-round by kind friends from Putney..............Once it was properly established, I handed the building over to the local Party, which was able to have its own property for the first time. Nine years later the Party was able to take out a modest mortgage and purchase a bigger building containing a much more suitable High Street office."

Peter Hain's Neath Advice office is pictured below. The flat above is known as 39A Windsor Road. It is apparently occupied by a Neath resident named Mr Mohamed Hassan Al Musaied, who is the Director of the limited company outlined below. Company details are also highlighted on the Internet. Since March 2013, Mr Al Musaied has been an unelected councillor on Neath Town Council representing the Cefn Saeson ward. He was a Welsh Labour candidate. 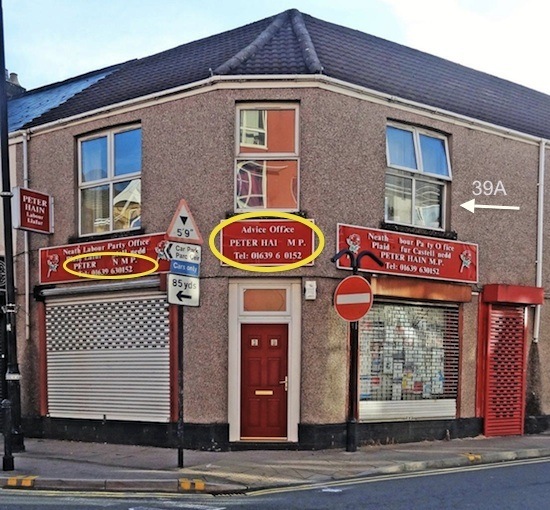 Below is the company who give their address as 39A Windsor Road Neath and details of their trading description on the Internet: 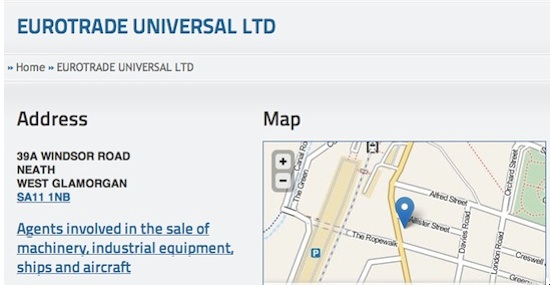 Exporter agent of ships and aircraft to Iraq and the Gulf area.

The photograph of Peter Hain's Advice Office was taken on 6th June 2014, the day he announced that he would not be standing for the next general election (2015).   Perhaps the missing letters in his name over the door (ringed) ironically indicate that the end is nigh!

Prior to IPSA being established in 2010 the rules and advice to all MPs relating to business costs and expenses had been provided by a publication by Parliament known colloquially as the Green Book. The rules anticipated potential conflicts of interest in MPs renting offices from their own political parties and set out specific advice on the matter.

For example, in 2004 the Green Book (relating to the rules and advice on MPs' claims) stated:

You are advised to ensure that arrangements for your office and surgery premises are above reproach and that there can be no grounds for a suggestion of misuse of public money.

You must avoid any arrangement which may give rise to an accusation that you - or someone close to you - is obtaining an element of profit from public funds; or that public money is being diverted for the benefit of a political organisation

Exercise particular care if the accommodation is leased from a political party or a constituency association. You must ask an independent valuer to assess the property in order to ensure that it is being rented at no more than the market rate.

The multi-party funded purchase arrangements for the first office in 1991, then followed by the 2001 property purchase by the Neath Constituency Labour Party - who then let part of that building back to Peter Hain - yet apparently retain their own rights to occupy the building on a regular basis, hardly seems a straightforward arrangement. Most lease or licence arrangements for property lettings grant exclusive occupation for the lessee or tenant. Yet despite the running of Peter Hain's constituency advice office being entirely funded from the public purse, there is no exclusive occupation. Such shared arrangements can be accused of lacking transparency and to the benefit of the political parties involved.

IPSA published figures recently showed there were 244 leases where MPs were renting offices from political parties, out of a total of 721 leases examined between May 2010-March 2013. The total number of leases is higher than the number of MPs due to some MPs having more than one lease during that time.

In a response to an IPSA consultation last year on the MPs' Business Costs and Expenses Scheme, Peter Hain stated the following, which amongst other things set out his case for IPSA continuing to allow the practice of MPs renting offices from their own political parties.

It is understood that IPSA is now deliberating on the whole practice of MPs renting from their own political parties and that a subsequent report will be published in the future.